View Profile
Zee’s Rock and Roll Family, the very unique dance reality show showcasing the talents of three generations of a family has now faced its first hurdle, just weeks after being on air! 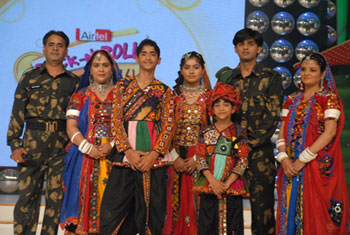 Featured Video
The buzz around is that the two families participating in the show, the Kapoor family from Jaipur and the Ubale family have defied all rules of the show and the channel is very annoyed with them.  Well, the cat is surely out of the bag now, as one of the members of the Kapoor family who claimed to be the son, is not even their blood-relative. In the case of Ubale’s, the family’s grandmother who has been loved by all turns out to be Ubale’s sister!! The channel and the show caught in the midst of these misquoted identities calls for a fair deal now, and going by the format of the show, the channel is contemplating packing off these families now.

Satish Dutt, the Director of the show throws more light on how these revelations about the families caught their notice. “At the time of auditions, every participant had to fill up forms and sign legal papers mentioning their relationship with one another. These two families were to do the same. But at the time of signing a legal bond, the Kapoor family declared that their son was adopted by them, as his real parents couldn’t bring him up. Also, the Obale family when continuously asked to sign the legal paper came out with the fact that the old lady was actually the sister!”

Well, how is the entire matter being handled now? “We have sent our investigating team to get more facts on this story. Though the families have pleaded that their real intention was to take part in the show and not to cheat them, Ajay Devgan, one of the judges on the show, got really wild with the turn of events”, confirms Satish.

It is heard that when the fact opened up, Ajay got very livid and demanded that these families be sent home, as they cannot be allowed to break rules. Satish adds on, “We are indeed in a state of shock about all that happened. Even though investigations are going on, I guess the matter has finally been left to the viewers to decide whether the families should be allowed on the show or not”.

A very unhappy state of affairs this, when we think that the show has its concept etched very clearly!!

+ 2
14 years ago if they can prove that he is an adopted son...ie. legal documents..then that is fine. but if there are no such legal documents in place then they have indeed cheated the show and audience.
Adopted children are the same as biological children with the exception that there is no shared DNA.
Thanks,
Soni

hotred31891 14 years ago i don't see what the problem with the kapoor family is though, if the show cannot accept that an adopted son that shares no blood relation can be family, i feel the show is not worth watching. An adopted son is a son afterall. The ubale family howver is in hot water

+ 2
14 years ago this show is really boring,I can't wait till Saregamapa is on agian.

+ 7
14 years ago Disgusting. This is not fare!! they should be eliminated!!

+ 2
14 years ago fair is fair...and i guess they shouldn't be allowed to participate...

+ 3
14 years ago i think they shud nt be allowed .... kajol has been everytime saying abt fly ..also tanuja n everyone actually always said abt the principles of doing the show n of fly .. why they did the shw .. the judges always gave importance to fly n nt dance...these judges r so lineant than any other competition shw judges .. and these two families ditched nt only the judges but the audiences as well .... so i think they shud nt be allowed at all ...

Man this is awesome... i would love to see kajol's expressions on this..

+ 4
14 years ago controversies finally! and now the trps shoot up! zee must be smiling.