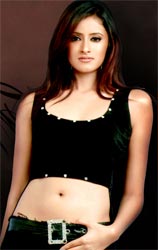 There are more problems in store for Yug (Kunal Verma) and Vrinda (Pooja Bose) in Star Plus' Tuj Sang Preet Lagai Sajna, with the entry of another girl other than Bubbly (Garima Bhatnagar) in the life of Ashish (Mayank Gandhi).

According to our source, "Mihika Verma who played the scheming Ashlesha in Kis Desh will make her entry in Tuj Sang soon. She plays the character of Bhumika who comes in as the love life of Ashish. The future track will see Ashish and Bubbly getting married, but once Bhumika enters the house, she will start creating problems".

When contacted, Vikas Goopta Creative Director confirmed the news and said, "Yes, Mihika is entering the show. She will spice up the story, by creating problems in the house. Vrinda and Yug will together solve the problem, that's all I can say now".

We called up Mihika, but she simply refused to talk saying, "I can talk on my role only after my character is introduced in the show".

Mihika's entry will be aired sometime next week.. She was also seen in Balaji Telefilms' Kitani Mohabbat Hai.

13 years ago positive roles suits her instead of negative role

13 years ago I love Mihika..i hope she gets a postive role for once..nywy cant wait to see her=]

+ 6
13 years ago she's a great actress am sure again she'll garner loads of hatred from ppl there ....
Ekta ... pls give her atleast one positive role dear

+ 4
13 years ago good..personally i like Mihika..She is very good actress.She potrays her roles very well.with her in TSPLS the show may get good and interesting episodes...

13 years ago LOL I agree with belll4u...May she stay in tujh sang for a long time !

be there in Tuh Sang for a decade please