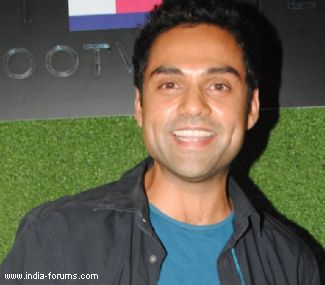 Actor Abhay Deol has left no stone unturned to make his character of an IAS officer in "Shanghai" look authentic.

He went through a complete makeover to play a 40-year-old bureaucrat: he met an IAS offier, put on weight and sported a moustache, a statement said.

"The suave actor actually met an IAS officer not only to understand their body language, but also to learn the intricacies of their job profile. Abhay does not want any stone unturned as far as his role is concerned hence he went through these lengths for his role," a source said.

The film is slated for a June 8 release.

Zayed excited to return to action

Actor Zayed Khan is looking forward to his new action flick "Tezz" as he returns to the genre after a long time.

"I am certainly looking forward to 'Tezz' because I am back into action after a long time," said Zayed.

=" 'Tezz' is complete action flick. I don't know why director Priyadarshan is known for his comedy ventures, he is better in action. He's the kind of director who doesn't let go of the drama. His joy and happiness is an extension of what he makes," added the actor.-*-

He might me an actor, but Neil Nitin Mukesh finds pleasure in creating music. Not surprising as his grandfather was legendary singer Mukesh and his father, Nitin, is also a singer.

"Playing or creating music is the most relaxing and magical thing on earth. It's so weird. Every time I sit to play I end up play love songs. Composed a tune after ages," Neil wrote on his Twitter page.