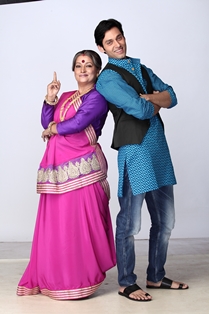 Every parent dreams of sending off their precious daughter to her sasural. But the unusual Shaktishaali family follows a unique tradition of bringing home a son-in-law instead of sending the daughter to her sasuraal. A hilarious comic caper produced by Red Dot Productions, Ajab Gajab - Ghar Jamai premieres on Monday 19th May at 9:30pm where Himani Shivpuri and Sumit Vats will be seen as the Nani saas and the youngest Ghar Jamai respectively.

Big Magic, India's first light entertainment channel featuring the best mix of fun relationship dramas, hilarious comedy sitcoms, comedy movies and more recently a historical comedy, now presents a witty comedy like no other - Ajab Gajab - Ghar Jamai. While the Shaktishaali household is run by a tough matriarch lovingly called Naniji, there are four jamaais across generations who try their level best to prove their worth to her. Himani Shivpuri plays the witty nani-saas while Sumit Vats has been roped in as the youngest son-in-law who works hard to win Naniji over.

Speaking on his role, actor Sumit Vats says, "The comedy genre is working excellently with audiences and I'm excited to be a part of this show. My character is that of the youngest son in law and the house is a web of madness. The show, with several eccentric characters, is going to definitely make audiences laugh!"

Says Himani Shivpuri, "I have been a part of a lot of sitcoms for many years now, but when I was offered the role of Naniji for this show, I just couldn't refuse it! The show has a very unique concept revolving around a family of jamaais. As the matriarch of the family, it is my duty to keep all the niknamma son-in-laws in line (laughs). We've had a lot of fun shooting for this show and I think audiences are really going to enjoy watching this madcap family."

Divineluster 6 years ago Sumit is the best...

Nels 6 years ago Looking forward to show. However I have a question:
I don't see page for BIG MAGIC Channel on IF. Will we have one for this show?

Shrabani..Das 6 years ago nice to see u again in a show..SUMIT..Keep rocks

Smiley7 6 years ago Best of luck in everything you do .. Keep smiling Mr. Vats