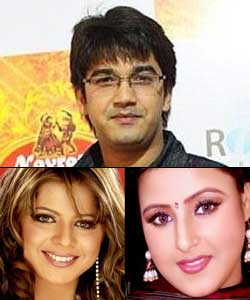 It seems the creative team of Beend Banunga Ghodi Chadunga on Imagine are leaving no stone unturned to pace up the drama after Jay (Anuj Thakur) and Sarika's (Jayashree Venketaramanan) separation.

Recently, Jay left his house and moved to Singapore following which another next drama is waiting in the pipeline to be exposed giving the family a reason to worry. As per the recent episodes, Sarika learns about Adesh's (Madhav Deochake) extra marital affair with Meera (Rucha Gujrathi) as she co-incidentally bumps into the two at Meera's house. Hence, Garima (Neha Mehta) will no longer remain aloof from the same fact.

A source elaborating more on the twist informs, "Soon Garima will get to know about Adesh's affair and will be asked to choose one of them. Adesh will however pick to live with Garima, leaving Meera alone which stuns her. As she gets insecure, Meera tells Adesh that she is pregnant with his child."

"Meera being pregnant will put Adesh in a major dilemma but the fact that Meera is faking her pregnancy will unfold later, "signs off the source.

A source from the channel confirmed the buzz.

All our efforts to reach Rucha Gujrathi remained unavailable.

Yuvika_15 9 years ago garima after finding out her hubby is having an affair asks him 2 choose between her n the other woman? oh man y is she portraying herself as a weak woman, stand up man, dump him n move on... once a cheater always a cheater!

NandiniSh 9 years ago most imagine current shws are flop anyway

parii2 11 years ago gv him sum space yaar,he is 2 good to be pressurisd like this.i dnt think he is one of those who will hide his relationship,jab hoga tab bata hi dega

dua_44ever 11 years ago Media meherbaani karke chod do un dono ko unke haal pe...if there is something that they want to reveal...they will when the time is right!

tulipbaby53 11 years ago can't wait to see this movie!!
i love shahid and priyanka both!!
priyanka really is an amazing actress, and i'm glad she's finally getting the recognition she deserves!!