The studious Mayank aka Arjun Bijlani will now have a makeover for a day in Star One's Miley Jab Hum Tum, produced by Sunshine Productions where he is given a task to impersonate someone else…. 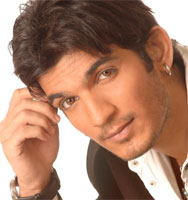 Featured Video
According to our source, "Tamanna Ma'am gives Mayank a task of impersonating the cool dude Samrat aka Mohit Sehgal for a day. And the very bookish Mayank will now be seen in a totally new avtar as he flirts with girls in fultoo Samrat sytle".

At the end of the day, Mayank gets successful in enacting the character of Samrat and gets applauded by one and all.

We called up Arjun to get his reactions on this particular sequence and he stated, "It was funny to do everything which is so unlike Mayank. But it was great fun. However, I would want to make it very clear that Mayank will be like Samrat only for a day (smiles)".

This funny episode will be aired on May 5th.

Well, wonder how Samrat reacts when he sees his duplicate in action with girls!!

8 years ago be back soon Mohit Sehgal to rule our hearts.

Barnali8 13 years ago Gud Arjun . U r d only actor who excels in all kinds of character. I think u will do justice wid dis character too. Keep it up. TK care.