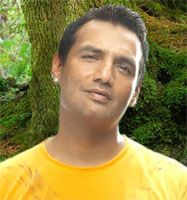 After the explosive news of about seven contestants walking out of the show, the latest revelation of Marc Robinson, one of the contestants on Sony Entertainment Television's reality show Iss Jungle Se Mujhe Bachao comes through to prove that unexpected is what you can expect of life, or reality shows to be more specific.

According to our source, "Marc has confessed to have had a live-in relationship with Preity Zinta! Marc also said that the relationship lasted for about two years until they separated." The source further adds, "The relationship reached a dead-end as Marc and Preity's lifestyles were completely different. And both of them being people of strong identities understandably must have stood their grounds, unable to reach a compromise."

Even presently Preity and Marc's life are as different as it can be. Preity is getting over her broken relationship with Ness Wadia and Marc is happily married to model Walushca D'Souza with whom he has two kids.

Well, this ought to be the best of revelations to have happened in the jungles of Malaysia!!

+ 2
13 years ago Everyone knows Preity and Marc dated at one point of time!!!!!Marc then went to Walusha and they broke up!!!!!!

13 years ago its not a shock..every 1 knew that..nd dis has already been aired

13 years ago I already knew about it many years back...both of them were very open about their relationship.... its not a shock!!

13 years ago very old news..everybody knew about them when preety was in initial stage of her career

+ 2
13 years ago well alwayz knew tht preety n marc were going around when priety was a struggler cuz marc was quite famous at tht time as a model so it made big news so i guess its true .......i think they broke up right after prietys initial movies got released or even b4 tht

13 years ago it is true...even preity had admitted it in one of her magazine interviews a long time ago.

+ 4
13 years ago thnx..wonder if its true or again some publicity stunt..

13 years ago Isnt this a known fact that Marc and Priety were seeing each other for a long time.