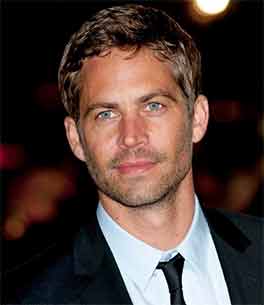 Fans around the world are still in shock over the sudden death of actor Paul Walker. Best known for his work in "The Fast And The Furious" series, he died in a car crash and joins a list of actors such as Scottish character actor Ian Bannen to Indian actress Soundarya who lost their lives in accidents.

IANS lists some of the national and international artists who lost their lives in a car or plane crash:

Ian Bannen: The Scottish character actor, also a successful figure in London's theatre circuit, died in a car accident in 1999. Just like Walker, the BAFTA Lifetime Achievement Award winner, known for his roles in "From Beyond the Grave" and "Waking Ned" was in the passenger seat of the car driven by his wife, Marilyn Salisbury. He was 71.

Soundarya: Indian actress Soundarya, a popular name in southern cinema who played Amitabh Bachchan's love interest in 1999 Hindi movie "Sooryavansham", was only 31 when she met with her tragic end. In 2004, she was aboard a Cessna 180 aircraft that caught fire near Bangalore right after take-off and crashed.

Yasho Sagar: He made a fantastic start with his debut movie "Ullasanga Utsahanga", a big hit of 2008, but lost his life in a road accident near Tumkur in Karnataka in the same year. He was in his mid 20s.

Besides Sagar, his assistant Vishvanath Reddy was also killed and another person injured in the accident.

In his short career, Yasho did the lead role in "Ayyo Pavam", a Malayalam remake of "Ullasanga Utsahanga". Then he featured in his father B.P. Somu's production venture "Mr Premikudu".

Jaspal Bhatti: Indian actor-comedian, the man behind the "Flop Show" hit comedy, succumbed to his injuries after an unfortunate car accident in 2012. The incident took place when he was driving back to Jalandhar from Bhatinda after promoting his film "Power Cut". His son Jasraj, who accompanied him, was badly hurt.

Taruni Sachdev: The child star, known as the Rasna girl, died in a plane crash in Nepal in 2012. She was among the 13 Indians killed in the crash. She was just 14. At such a young age, she had done over 50 commercials and played a brief role in Amitabh Bachchan-starrer "Paa". She was one of the most popular child stars in southern filmdom.

The actors were travelling in a Wagon R when they were hit by an out-of-control tempo. The actors were returning from the shoot of a show in which they played father and son.