The vivacious actress Mansi Salve is back on small screen and will feature in Madhur Bhandarkar's Specials @ 10 on Sony titled Anjali. 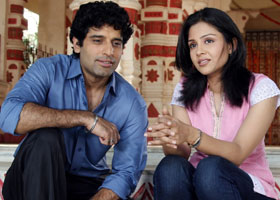 Featured Video
"I am back after a break of two years. I had delivered my baby, and this kept me away from television," says Mansi.

Mansi was last seen portraying the character of Sonam in Ek Ladki Anjaani Si. She shot her last episode with Shakti Anand in Ek Ladki, and now she is cast opposite Shakti himself in Specials @ 10.

Says Mansi, "Shakti hasn't changed; the studio is also the same, and I don't feel that I was away for two years," states the actress. Elaborating on her character she quips, "My character is of a doctor in the show who is practicing in a small town. Something happens in the society and she fight against the norms of it."

Dr. Anjali Pradhan (Mansi Salvi) shifts to her hometown and joins the hospital that is conducted by the trust that runs the temple which has become the main stay of the town. She is astonished to find that numerous people are getting admitted in her hospital with the same symptoms after consuming the water of the temple as "charanamitra."

She decides to fight against this water contamination and create awareness amongst the people but people in turn question her faith in God.

Watch Mansi in action this Thursday, May 14th, at 10 PM on Sony.

Barnali8 13 years ago WELCOME BACK MANSI and SHAKTI.