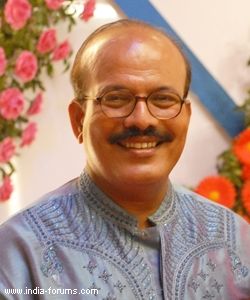 Its a known fact that the new Manav (Hiten Tejwani) is finally going to enter Zee TV's Pavitra Rishta in the coming episodes. But with a new actor, the show will also see the entry of one of its old vital character of the family.

A source states, "Manohar Karanjkar who made an exit from the show long time back due to the tension brewing in the family will be back with Manav though his whereabouts will be revealed later. For the time being Manav will come along with Manohar. As Archana and Manav have failed to save the house, Sulochana (Savita Prabhune) will be weeping at a corner of her house as the day when the house gets mortgage is the day of her wedding anniversary which will make her feel miserable. But at the same time Manav enters along with Manohar Karanjkar back to the family."

We contacted Ankita Lokhande to hear her side of the story but she seemed rather clueless about the same. She says, "Ohh is it? Manohar is coming back. I really have no idea because today is my holiday and I have no idea what is happening on the sets."

All our efforts to reach Kishori Govind Mahabole (Manohar Karanjkar) went in vain.

So a lot of exciting sequences are instored for the viewers in the coming few weeks. Keep watching!

9 years ago she does not know what's happening and Zee is already airing promos? who to believe hmmm????? The show ran out of tracks a long time ago and they seem to be rotating the old ones

9 years ago this show needs to shut down. it's better to watch cartoon films rather than watching these insane cartoons (characters) in action.

9 years ago Ankita why u r doing this show. Pls don't do buddhi ka role. Pls quit PR as earliest as possible and do another good project.

9 years ago it seems like earning money and becoming rich is super easy in ekta's world. great!!!!!!

abhie007m 9 years ago Who has written this post, with such screwed up & pathetic english!!!

9 years ago Still trying to figure out why they let him go for so long. Manohar is the only stable character. Now it is time to bring back Damodar.

I hope it is the same actor.lol

+ 2
9 years ago so much excitement in the show but old manav will be missed. hope hiten really fits in his shoes

+ 2
9 years ago I wish I could see the old happy Karanjkar family once again in PR...

+ 4
9 years ago From the precap i did think its Manohar!!
Anki's comment is hilarious