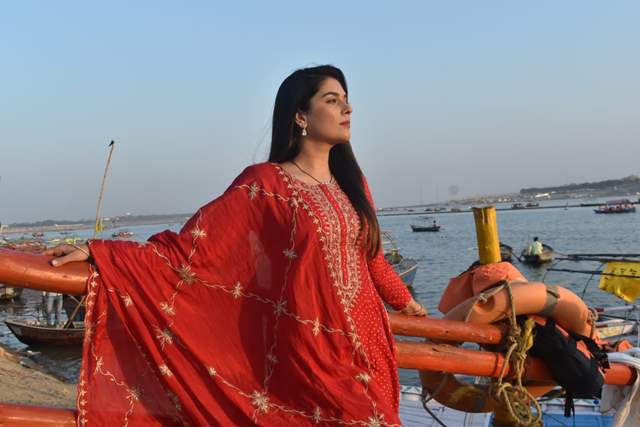 The announcement of Season 2 of Mann Kee Awaaz Pratigya got fans and actors enthusiastic & they are on cloud nine. Lead actress Pooja Gor recently got in touch with us where she spoke about preparing for the show, returning to TV after such a long time, and more.

What is it like to return to TV with a show that has always stood out?

It is amazing, it truly is. You don't get too many chances like this in life to be a part of an iconic show after the first season of it and to do it all over again. With season 2 of Pratigya, life has come to a full circle that's all I would like to say.

Stereotypes around television exist, and sometimes, it feels like some shows try too hard to break them. What do you feel?

Content on TV has certain protocols and certain principles, the audience for TV is very different for the audience for films or from the audience of OTT, and what works on TV works because the audience likes it, otherwise the makers wouldn't make it because after all, it is a business. So if it is not working, they will not make it. First of all, it really baffles me when people say that TV is regressive and other stereotypes that are associated with TV. I don't feel it is fair to say all of those things, it is only that way because we like it that way and it is not just that. As you said, a lot of makers and networks and TV shows do try to change that to break that stereotype. We made Roshni, which was a very beautiful show, it was not a typical kind of show. Then there are shows like 24 and Everest that Star has made, so there are people who are trying to break the stereotype and no one says that it is this way or that way only.

What kind of prep went into the show?

Honestly, I am doing a TV show after 6 years and in the last six years, I was not used to shooting every day or have long hours, so I got and very comfortable with having laid-back shooting hours and laid-back days. I was not shooting for at least 3 days a month. So I was doing a press conference the other day and someone told me welcome to the Jungle and that sort of made me realize that it is true in fact. It is a grind. But I take each day as it comes and quite honestly, I am loving it because I realize I was missing it, I like the thrill, and I like the rush of getting up every single day, working for 12 hours, going back home, and having this routine. I missed it for a long time but then I got comfortable and that is what I had to prepare in my head. There is of course working on the character, but that wasn't an issue because it was a character that runs in my blood. I had to learn little things here and there, I had to learn to pick maternal instincts, pick things from people around, etc.

But I take each day as it comes and quite honestly, I am loving it because I realize I was missing it, I like the thrill, and I like the rush of getting up every single day, working for 12 hours, going back home, and having this routine. I missed it for a long time but then I got comfortable and that is what I had to prepare in my head.

For someone who has done Bollywood, what do you have to say about the treatment meted out to Tv actors?

I was treated like any other actor on set and because I come from a background of such a long work experience, it was even better. I don't think anybody in Bollywood or films or OTT treats television actors as any different from they would to their so-called Bollywood actors. Actors are actors, whether it is Bollywood actors or television actors, or theatre actors. I don't think there is a problem with how especially TV actors are treated. In fact, the way they are treated is really really well because of the kind of skill set they come with. I don't think any Bollywood actors have done 12 scenes in 12 hours. We have a certain superpower and that is a plus over other actors so, I don't think whether it's me having worked in a film set or other friends of mine, who have worked on a film set on a film have ever faced an issue that they were not treated a certain way or nicely because they were TV actors. I don't think that it happened.

Second seasons of various shows have been coming but as a web version, allowing it more freedom. Would you have preferred that to happen as well?

No, not at all. I wouldn't have wanted Pratigya to go on just OTT. Yes, it is going on the web but along with the television telecast. People can watch it at 8:30 or otherwise, they can watch it later so it is a great thing but I don't think it would have been a good thing if the show would have come just on OTT.

The show also witnessed the return of Arhaan Behll along with Pooja in the lead role.