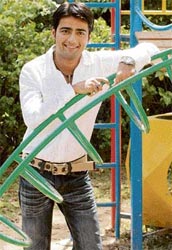 The recent episodes have revealed that Prapti is in love with a guy from her college, and she has expressed to her mother Dr. Kalyani (Neena Gupta), that she wants to marry him.

In today's episode, the boy will be revealed to the viewers. Manish Naggdev who was last seen in Geet Hui Sabse Parayi will play Mayank, her boy friend.

Our source states, "Soon Mayank will come to Prapti's house and will have a word with her mother, Dr. Kalyani. He will also express his desire to marry Prapti. It will also be revealed that Mayank is the younger brother of Sonakshi (Sucheta Trivedi), who happens to be the wife of Krushna, played by Ajay Chaudhary".

"Mayank will be shown to be a positive guy who has been in love with Prapti for a while now. The story will now focus on Prapti's engagement ceremony; noted actor Rajeev Verma will play Mayank and Sonakshi's father", adds our source.

We hear that the funny and interesting character of Sonakshi will be seen performing on the number 'Munni Badnaam Hui' in the engagement sequence. This particular scene was shot today.

When contacted, Manish Naggdev confirmed the news and said, "Yes, I am entering Dil Se Diya Vachan as the parallel lead. I will play the boy friend of Prapti, who is Prem's sister. He happens to be the brother of Sonakshi".

Meanwhile, Nandini (Vandana Joshi) has got to know about her bitter past, and is presently in shock. Dr. Kalyani has sent her back to her sister's place so that she buys some time to reveal this truth to her family, especially Prem.

Thinker_Belle 9 years ago Mayan and Prapti look good.. hope there are more scenes of them in the coming episodes..

gauchaforever 9 years ago missing lotz lnmdj & y fav couple prida.aroun one year has gone but no news about guacha together.

plz wanna back to gaucha .

fj08 9 years ago thanks for pointing out the past referene, he was in santaan, too bad there arent a lot of videos from santaan on youtube, i would have liked to watch GK in it

daddys_girl 9 years ago the show is getting more and more interesting...

thought i had seen him somewhere...now i remember, lol

-Preeti- 9 years ago This show has finally picked up ... welcome manish

jani74 9 years ago now when ur girlfriend is unemployed u get d job...its gud.

seema.. 9 years ago ohh i love this cause the guys' name is MAYANK

JennyPenny 9 years ago Oh. That;s cool. Good luck to him.

Saying Goodbye To 'Keeping Up With the Kardarshians' - ...
25 minutes ago

Here Are The Indian Shows That Made it To International Emmy ...
47 minutes ago