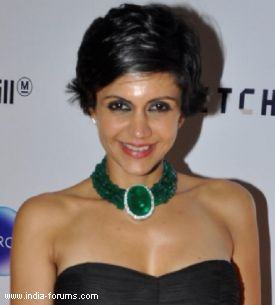 Actress-anchor Mandira Bedi will make her ramp debut as a designer at the forthcoming Lakme Fashion Week summer-resort 2014. She says her sari collection will be high on "efffects" and low on embellishments.

"LFW is the best platform to showcase my collection," Mandira said at a press conference here for the extravaganza.

Mandira ventured into fashion designing last year and she even opened a signature store here.

Talking about her new line, she said: "My collection wil see bright and summery saris and it will have lots of fun colours. The line will have more efffects and less emblishmets," she said.

There will also be a celebrity showstopper, but Mandira was guarded about this.

"I can't reveal her name right now," said the entertainer, who has proved her acting acumen on the small and big screen over the years.

Recently seen in the Indian version of "24", Mandira says she wants to explore different facets of herself and that is why she has tried acting, anchoring and now designing.

"We have just one life. I want to explore everything. But I have not left entertainment...it's just that I am trying something new," she said of her choice of dabbling in the world of fashion.