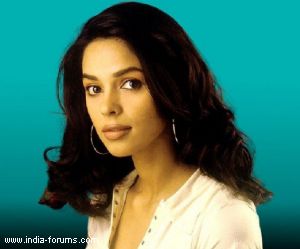 Mallika Sherawat, the sexy siren will be now seen in Colors' Na Aana Is Des Laado. The actress who has been on her toes, promoting her upcoming flick 'Hiss', was recently seen in Zee TV's SaReGaMaPa Singing Superstar. In Laado, she dons the role of a Banjaran who comes with her troupe to dance and perform on the special occasion of Sia's (Natasha Sharma) Godh Bharaai.

Our source tells us, "Mallika performed scintillatingly on one of the numbers form 'Hiss'. She will be shown as a lady having some magical powers who can sense if there is anything wrong happening anywhere. During the Godh Bharaai, she understands that Ammaji (Meghna Malik) is trying to harm Sia and her unborn baby girl. Mallika will in turn protect Sia and her kid which is in her womb".

When contacted, Natasha Sharma confirmed that she shot with Mallika, but refused to divulge details.

This particular sequence of the show with Mallika Sherawat will be aired soon on Colors.

10 years ago wat hell u r planing now raghav sia will die and we shld c this serial to knw abot their murder .and v dnt want laado with they both.its gng to b abiiig flop

+ 3
10 years ago as if they hadn't had enough going on in the show already!

10 years ago Eww man I hate Mallike I saw the promo of Hisss and it's disgusting. Absolutely disgusting I hate it. It makes me want to be physically sick I HATE SNAKES AND HER!

+ 2
10 years ago instead of getting mallika sherawat,if the cvs decide to not take the suicidal step of killing off rasia,it wud do their show lot better..and seriously what kind of wierd pic is this?she is almost topless in it..

+ 2
10 years ago gosh her pic is pathetic on the article....dont like her anyways