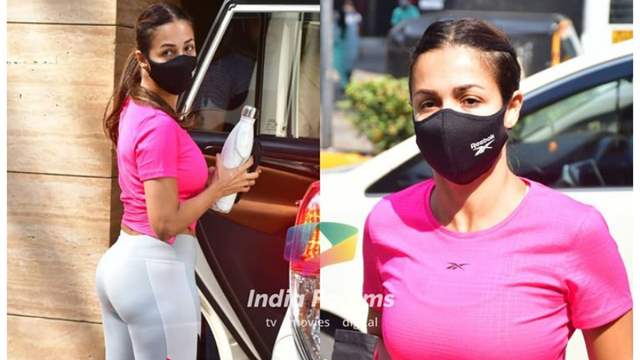 Bollywood celebrities are always under the scanner because as public figures, their lives are out in the open for everyone to spectate and even judge. While this amounts to unprecedented fame and love from followers, it also paves way for trolls who leave no opportunity to take potshots at actors.

Malaika, as usual, was on her way to the gym when she was papped by the shutterbugs. Dressed in pink athleisure wear: a T shirt baring her stomach and yoga pants, the diva posed for the photographers in Mumbai.

As soon as the pictures were shared by popular celebrity photographer Viral Bhayani on his page, several comments started pouring in where a section of netizens trolled Malaika for her stretch marks.

Several trolls dropped in nasty comments as one wrote "Tummy se budapa dikh gya (sic)," while another one said, "Abhi lag rhi hai aged.... she is getting old (sic)."

However, on the other hand, netizens also came to Malaika’s rescue and defended her against the trolls. "So whats the big deal?" wrote an user and another defended: "These people bitching Malaika and praising Jennifer Lopez and Jennifer Aniston!!! Hypocrisy is at its height (sic)."

Malaika Arora was married to Bollywood actor-director-producer Arbaaz Khan in 1998 and after 17 years of marriage, the couple filed for divorce citing compatibility issues. The duo has a son, Arhaan Khan together.

Meanwhile, Malaika is often in the news for her relationship with actor Arjun Kapoor. She was recently spotted at the sets of Kapoor’s upcoming film Bhoot Police.

1 months ago Man, people are ijits. This woman looks so good for her age.

+ 7
1 months ago There is nothing to be shame about stretch marks. We all have it. We should rather embrace it than making fun of it. That's so low.

+ 2
1 months ago women should be proud of those stretchmarks

+ 2
1 months ago Malaika had a child and most women no matter age get stretch marks after giving birth. It's just more obvious now that she almost 50, stomach muscle isn't as tight. The woman looks great