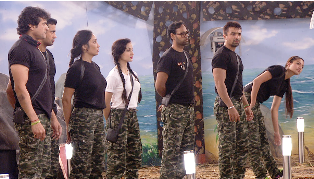 We have seen the Bigg Boss housemates quarrel with each other at regular instances. But this time around, they will be seen fighting not amongst each other but with outside enemies as a part of the luxury budget task.

At the start of the dawn, the housemates get a letter from Bigg Boss regarding a military task where they had to get dressed as military officials and battle it out with their enemies. The garden area was transformed into a battleground and the housemates had to lead the life like that of army personnel.

They had to cook, eat, sleep in the garden area and had access only to the washroom inside. As commandos, their objective was to protect Mount 'Bigg Boss' from attack of the enemies and continuously stay on a treadmill placed in the vicinity. At every given point of time, one commando had to be on the treadmill, even in the war times while the other fellow commandos had to protect them with the help of shields.  Being the captain of the house, Elli Avram was 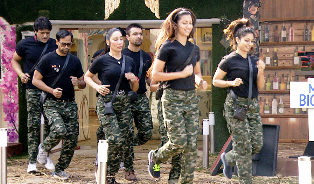 given the responsibility to be the General of the Army and was asked to streamline the task under her surveillance.

They also had to carry out a minimum of three drills during the day and had to follow the orders of the General. In the course of the day, they had to tackle three attacks and also had to protect the General from getting hurt. They successfully won the first battle and emerged as a strong team. But during the second attack the enemy targeted the commandos by throwing water balloons at them leaving Ajaz Khan and Kamya Punjabi injured. Ajaz and VJ Andy failed to follow the rules and also got punished for the same. The housemates had to continue the task throughout the night and be prepared for the war anytime.

Will the housemates be able to survive through the task and emerge victorious?

7 years ago hope as hell that this show flops for the rudeness and biasedness this season has given to its viewers..
don't care about its tasks anymre..