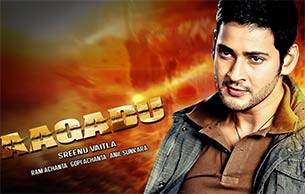 The makers of Telugu actioner "Aagadu" have released the film's first teaser Saturday on the birthday of superstar Mahesh Babu's father Krishna.

This is the second time in a row that Mahesh's film's teaser has been unveiled on this occasion. Krishna is celebrating his 71st birthday.

The first teaser of "Aagadu" promises viewers an out-and-out commercial entertainer with a lot of punchy dialogues. In the video, Mahesh Babu has trolled co-star Pawan Kalyan with regard to his last film "Attarintiki Daaredhi".

Directed by Sreenu Vaitla, "Aagadu" marks the second time the director has teamed up with Mahesh Babu after "Dookudu".