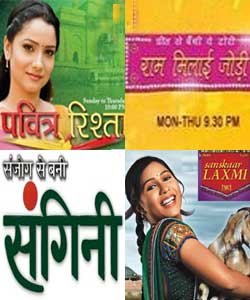 The shows will have a separate storyline of their own which will bring in the four shows together.

Coincidentally the Dhaba is the shooting location of Sooraj's (Rohit Purohit).  Sanskaar Laxmi will see the dramatic exposure of Ragini (Anisha Kapur) by Laxmi (Veebha (Vibha) Anand), where Sooraj will come to know that Ragini has been cheating on him.

Rudra (Iqbal Khan) and Gauri (Binny Sharma) who are preparing for Pihu (Additi Gupta) and Rudr's wedding will land up in the same Dhaba as they take a lift from Sooraj.

In Ram Milaayi Jodi, Anukalp (Nishant Malkani) will go thro' a bad phase at the work front and hence will decide to come to the Company Headquarters in Mumbai. Mona (Sara Khan) will also accompany him as they are also invited for the anniversary party of of Archana and Manav.

We contacted Anisha Kapur who told us "Yes Ragini will get exposed but don't know further details of the track."

When contacted, Ankita told us "Yes Maha-Episode will be there, but I don't have any clue about the track."

We contacted Vibha Anand aka Laxmi, and she says, "We are shooting for the promos, so I really have no idea about what will happen in the track. But I hope everything gets straight in the Maha Sangam episode.

The Mahasangam episode will be aired on 23 May from 9-11pm.

Ankita Lokhande urges everyone to join her and pray for Sushant Singh ...

tammana.m 9 years ago AG you're a fab actress and has beautiful smile :) Can't wait to see you back on tv !! We miss you a lot :( All the very best AG for your next show!!!

u r the real star of indian Tv

molly45 9 years ago Missing our Pihu and Abhay
Come back soon AG &lt;3

molly45 9 years ago Miss our Pihu in Sangini.
Waiting for you to come back on tv Additi :D

-Rimsha-sizzles 9 years ago Love you Additi
Miss you a lot
keep smiling !!!!!!

-Rimsha-sizzles 9 years ago Love you so much AG
Come back soon on TV :)))

AMMI6 9 years ago Additi gupta love you God bless you and Keep shining. All The Best and please come back soon

AMMI6 9 years ago Additi gupta love you Goregous, God bless you and pleasee come back soon