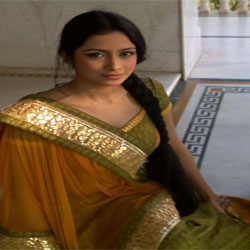 But now the news is that Madhura Naik is finding it difficult to cope up with the regular travel between Ahmedabad and Mumbai and has decided to quit Shakuntala.

According to our source, "The shoot for Shakuntala is in Gandhinagar, Ahmedabad and actors who are doing more than one projects are finding it difficult".

We called Madhura who confirmed the news and said, "Yes, I have decided to quit Shakuntala as I am not able to manage my dates for Kis Desh".

If sources are to be believed, Madhura's track will come into the fore again in Star Plus' Kis Desh where she will eventually get married to Harman and will enter the Juneja House to create more problems.

It is also heard that the production house and the channel are looking for a suitable replacement for the role of Gauri.

13 years ago Great. Now there will be more problems in the Juneja house. Can''t they show something different?

13 years ago yeah she''s afraid of ekta''s super tantrums.but she should have had left des and remained in shakuntala .....let ekta find a new villain.

13 years ago that''s probably not the best decision, to leave a great show like shakuntala to try and be in an ekta show, where her role may or may not be that important... i don''t know, but best of luck to her...

+ 3
13 years ago she should have quit kis des ... because who knows after the new track, she will disappear atleast with shakuntala she''ll have a good role and be there ... as she''s the parallel lead

+ 4
13 years ago Aww no! I loved her as gauri! Why did she have to leave? Uff it is a much better role and she was sweet in it and Kes des is already messed up! Don''t want more and more problems!

+ 4
13 years ago harmans getting married to her? more problems now soooo not great!