Of all of April's commendations, it is also considered as the Poetry Month and for that reason, BollyCurry brings to you a special weekly feature, only for this month, where we will present to you lyricist who has significantly contributed the Bollywood music industry - the Lyricist of the Month!
This week the spotlight is thrown on Prasoon Joshi who is often known for penning the music for many hit films including Rang De Basanti (2006), Taare Zameen Par (2007), Break Ke Baad (2010), and Bhaag Milkha Bhaag (2013). 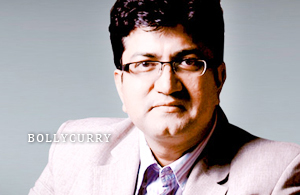 Joshi was born on September 16, 1971 in Uttarkhand, India. His father, DK Joshi, was a PCS Officer with the Civil Service of the state government before moving on to become an Additional Director of the state's Education Service. Owing to this and having spent much of his time in various locations around India, Joshi's music is popular for his ability to capture the fine essence of India in his songs.
Completing his BSc in Physics and then receiving a MBA from the Institute of Management Technology in Ghaziabad, Joshi fell upon the genre of art and culture, which eventually lead him into a career in advertising. This is where his love for media and culture began.
Joshi began to write at the mere age of 17. He published his first book, Main Aur Woh, which is inspired by Frederich Nietzche's Thus Spake Zarathustra at this age as well. His most recent book, Sunshine Lanes, contained a collection of his songs and was launched at the prestigious Jaipur Literature Festival in January 2013.
Being an ace amongst many spades, Joshi's career began with one of the world's most popular agencies, Ogilvy and Mather, in Delhi. Ten long years later, he received the heightening title of Executive Creative Director of the Mumbai office. In 2002, he acted as Executive Vice President and National Creative Director for McCann-Erickson. Following that, he became Regional Creative Director, South and South East Asia in 2006. Later that year, he was awarded yet another title as he was announced the Executive Chairman for McCann World Group India and Regional Creative Director for Asia Pacific.
Other than his hit songs, Joshi also has a stupendous list of popular advertisements to his name which consist of his campaigns for NDTV, LG, the Cannes-winning Coca-Cola campaign alongside Aamir Khan, and the Happydent commercial which was considered the best ad of that year by experts all around.
Joshi began his film career with the movie, Lajja (2001), followed by Yash Raj Chopra's Hum Tum (2004). That then led him to write songs for various other successful films such as Black (2005), Fanaa (2006), Taare Zameen Par (2007), and Delhi 6 (2009). In 2006, he not only wrote the songs for Rang De Basanti but also the dialogues.
In 2007, Joshi won the Filmfare Award for Best Lyricist for "Chand Sifarish" from Fanaa, and then another in 2008 for "Maa" from Taare Zameen Par. He recently won the accolade again for "Zinda" from Bhaag Milkha Bhaag. Joshi has also won the National Award twice; first for Taare Zameen Par in 2008 and then for Chittagong in 2013.
For a man that has gotten both national and global recognition, the sky is the limit. We hope the best for Prasoon Joshi in the future and eagerly await for what he has to present to us next!
Author: Harjot D.
Editors: Shreya S. and Jenifer Y.
Graphics: Shikha A.
Do you have a suggestion or comment for BollyCurry? Drop us a PM at BC_Dropbox today.
12 Likes