Sony's light hearted comedy, Bhaskar Bharti produced by DJ's Creative Unit will have a new angle to the story line in the coming episodes. 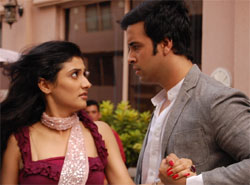 Featured Video
To make the going interesting, there will be a love triangle seen in the show. According to our source, "Bharti (Ragini Khanna) sees a ray of hope when KK (Rajesh Khera) tells her that if she marries Armaan (Aamir Ali), he will give back the real identity of Bhaskar. A frustrated Bharti sees this as the only solution to all her problems, and thinks of an idea to propose Armaan. This will be an interesting turn as Bharti who has always been avoiding Armaan is now keen on getting him in her life".

However, there is a twist in the tale as Bharti's close friend Payal (Aanchal) falls in love with Armaan. "Though Armaan has always had a soft corner for Bharti, he falls in love with Bharti's friend Payal, who in turn reciprocates her love for him. This development will leave Bharti in a fix, as she has to fight against her friend to get married to Armaan, so that she gets her identity back. This will lead to certain hilarious sequences, wherein Bharti finds herself at crossroads. There will also come a situation in Bharti's life where both Armaan and Payal are against her".

So will Bharti be able to convince Armaan to help her out of this mess? Will viewers see Bharti turning into Bhaskar all over again?

For your answers, keep watching Bhaskar Bharti on Sony, Monday to Thursday at 9 PM…

13 years ago Dusnt Payal loves BHaskar.. nd Armaan admitted in the last episodes that he only likes Payal.. dusnt love her.. he loves Bharti.. nd bharti is not gettig closer to armaan. infact she is running away from him.. she insulted him in the party as well.. this aticle is pretty ridiculous!!

+ 4
13 years ago Nahiiiiiiin lolzzz I loved Bharti-Armaan together!
But o well Armaan-Payal gonna be cute too =P

13 years ago NOOOOOO!!!! Poor Bharti!!! I want bharti and armaan together