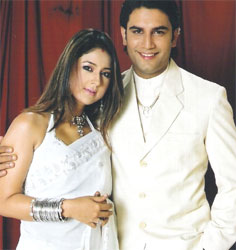 Zee's recently launched show Choti Bahu has been received extremely well by the audience, and the hard work of the entire unit has paid off as the show is the highest rated show in the time slot of 7.30 PM across all channels.

Well, the cast of Choti Bahu have been working round the clock to attain success, and this is taking a toll on their personal lives now!!

One such incident happened between the lovey-dovey pair of Kirti and Sharad Kelkar as hubby dear had to find a way out to meet his wife on the sets of Choti Bahu.. Kirti essays the role of Mrinalini in the serial and had been shooting day in and day out which gave the couple no time for themselves.

However, Sharad made up for this by paying a surprise visit to the sets. If that was not enough, he brought with him Kirti's favorite Ghar ka Khana. "Kirti was busy shooting for the Holi sequence, hence I decided to drop by with some fish and rice for her. It was great to be around her while she shot. Her co-stars Avinash and rubina are like younger siblings to me. We had a great time together", quips the dedicated husband.

Well, all we can say is, we envy you Kirti!!

+ 6
12 years ago they look good togethere, all the best to them

+ 2
12 years ago These two are really cute together, and it seems like they both love each other a lot as well, hope to see them in a show together! :D <3

Sharad is the best as Nahar or should i say Amrit since they killed off Nahar!!! [angry!!]

12 years ago they look good together and i liked them in sindoor too.

12 years ago That''s so romantic!
They did quite a few shows together...but liked them in Sinndoor!