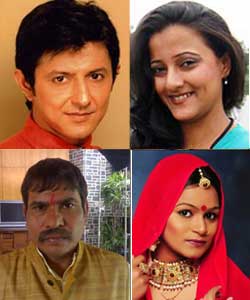 After the replacement of Krishna Gokani with Supriya Kumari, Imagine TV's Looteri Dulhan will now see a major change with regards to its cast.

The latest buzz is that the story will proceed towards a new track in the coming episodes with the introduction of Abhinav's (Mrunal Jain) huge family. In addition to this, the story will deviate from the Looteri Dulhan's family, which means that Billo's family will bid a silent adieu from the show.

A little birdie tells us, "The pivotal characters of the show till now, Ramcharitra (Sitaram Panchal), Suggi (Bharti Khandare), Dilli Singh (Smita Singh) and Angrez Singh (Yajuvendra Singh) will be out of focus, and might not be seen anymore. Their tracks will end with all the four
getting trapped eventually and sent to jail by Diamond. While Ramcharitr and Suggi will be shown in jail, Angrez and Dilli might be shown running away from the clutches of the police".

We hear that with their disappearance and introduction of new characters, the show will get a new flavor.

On the reason behind this change, our source states, "The major track of Looteri Dulhan did not work and with the replacement of the protagonist, a new track is being implemented. Also another reason to end the roles of Sitaram Panchal, Smita Singh etc might have been taken to reduce the cost".

When contacted,  Yajuvdendar Singh said, "As of now, we will all be caught by the police. We will not be in focus for few days as a new family is entering. However, we have been assured of a comeback in the show".

Smita Singh who essays the role of Dilli says, "The track did not work, and the creatives are now working on a completely new track. I wish them all the very best. It was a nice experience working for this concept".

With the entire original concept of Looteri Dulhan going out of the window, let's see what lies ahead for the audience..

joshdeep 8 years ago Krishna please come back,fans miss u so much.

PreciousPri 9 years ago hope this new change will work 4 u n this show n the channel... i havnt seen any epi 2 make other comments.. wish u luck Supriya!

Amy07 9 years ago ghrrr dont like any imagine show except kmh...

Nishajos 9 years ago Sounds good and Supriya being part of the show is anyways a wonderful news. Hope this holds good in the coming days.

Gopiii 9 years ago Sounds gud if the old concept is not working might as well change the whole thing...Supriya is a gud choice and it is time the story takes a different turn as well and also Supriya and Mrunal might make a gud screen pair in the long run if the story does well..All the best.