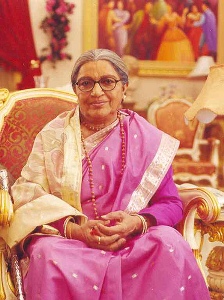 Tellybuzz earlier reported about Dheeraj Kumar's Creative Eye coming up with its new show on Sahara One, tentatively titled as Neem Neem Shehed Shehed and we also mentioned about Sejal Shah being finalized to essay a prominent role in the show.

A little birdie chirps, "After Sejal Shah,  the Production has finalized Lily Patel, famous for her role of Daadi in Kahaani Ghar Ghar Ki, will now be seen essaying the role of a very fussy granny. She keeps a check on the finance of the family whether they are not spending extra money on any commodity or purpose."

We had earlier reported about Lily Patel being part of Colors' Hamari Saas Leela, and now Lily, along with the Colors' show, will manage with Creative Eye's  next on Sahara One…

Talking more about the character a source says, "As the show is about a joint family who is living hand a to mouth existence, Lily will be essaying a person who will keep a control on the expenditure without being harsh on them."

When contacted Lily Patel, she was happy to hear it as she says, "I still have not received any confirmation from them as I have just given the audition for the same. But if that's the result then I will be happy to work with Dheeraj Kumar along with Asit Modi."

That's the spirit Lily… youngsters should really learn from you!

so what were the strong movies with strong characters that she did??

other than ghajini and ullam ketkumey I dont find her having a STRONG role anywhere!

-DulceMaria- 11 years ago m srsly tired of reading derogatory articles on IF. do some quality reporting plz

hindu4lyf 11 years ago Plus again I think IF 'reporters; (i don't think they deserve that name but woteva) have 'forgotten' to list their source or the name of the reporter.
How unprofessional!

bary 11 years ago oh come on get a life,u did films before in south just to perform in songs n some scenes with hero,now u got fame and demanding more all of sudden which is actually out of budget for a south film
i used to like u but not now,attitude should be used in right manner

hindu4lyf 11 years ago haha eveyone's coming to bollywood now. :)
I love teasing my friends about how everyone's leaving south to come 2 mumbai :P
thanks..

Rhea Chakraborty did not name any Bollywood actors during ...
31 minutes ago