Yasir Shah, the model turned actor from Pakistan who made his debut in Indian Television with the show Khwaish is one of the much sought-after actors today! . 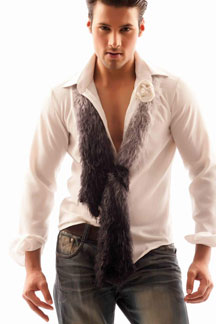 Featured Video
Which character do you relate more to, Azaan of Khwaish or Yuvi in Jiya Jale?
Definitely Azaan! I am enjoying playing the character Yuvi, but Azaan will always remain closer to my heart! Above all, that was my debut show, so I am all the more attached to it.

Interestingly both the characters you chose to play onscreen are lawyers.
Exactly!! This is the same thought that came to my mind when I was going thro’ the character sketch of Yuvi. But yes, there are few differences in the manner in which I have portrayed both the characters… So I am glad that way...

How did you bag the role of Yuvi?
After Khwaish, I went back to Pakistan to do some fashion shows. When I came back I got this offer from Synergy Adlabs. At that point of time, I was already in talks with Balaji for Krazy Kiya Re, which was still far to get started. So after getting a nod from them, I took up this role.

Any incident of your fans which had an everlasting impression in your mind that you like to share with us...
First of all I would say I respect each and every one who loves me and appreciates my work. I feel lucky that I got the great support of my fans ever since I started out as an actor. Recently I got a text message from my friend in Pakistan who said that my female fans out there were forcing their families to get Dish antenna because in Pakistan, we don’t get 9X on TV cable…  (grins)

Any dream role you aspire to do in future?
I want to play a Super hero character like Hrithik Roshan in ‘Krrish’

If you were not an actor then what would you have taken up as your career?
If I was not an actor, I would have continued to be a Model in Pakistan. Or maybe I would have started taking part in my father’s business in Karachi.

Are you part of Ekta’s upcoming show Kambakht Ishq?
I have no idea about Kambakht Ishq, but I was supposed to be in Krazy Kiya Re. If I get a call for Krazy again, I would surely be a part of it as I liked the concept a lot.

Will you want to try your hand at reality shows? If so, what are you good in, singing or dancing?
Yes, I am open to reality shows if I get a good offer. But it just cannot be singing as I am not even a good bathroom singer..So it has to be dancing!!

Any message for your Fans of India-forums!!
India-forums is like my family, it’s one of my favorite websites. Life is all about loving your career and relationships. It is nice to be important, but it is more important to be nice. I want to say a big thanks to you all for supporting and loving me. I am now addicted to your love, keep writing!! I would like to say, “Tera Mujhse Hai Janmo Ka Naata Koi, Yuhi Nahi Dil Lagaata Koi….”

+ 6
14 years ago and y not you deserve it...Hrithik was Fantastic in the movie!!
just love him :) his really proved himself as a Great Actor
n yes the sword practicing sequence was a killer!!!! shirtless :) made me Blush :) :) :)

14 years ago That sword practicing sequence was to die for!! lol. The movie was just awesome, and Hrithik was fantastic!

You truly deserve all the words of praise and appreciation. You have been amazing in the movie. May I say that it has brought back the memories on KNPH days.

14 years ago same here im frm karachi, pakii but in US! thnx india-forums!

well right now am in uk

14 years ago when is krazy kiya re coming on tv?