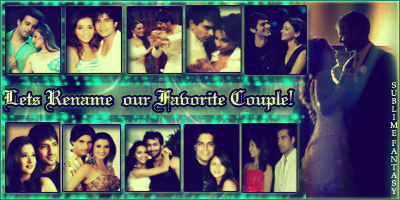 Webster's dictionary defines names as a word or symbol used to designate an entity. To us human beings, our names are our identity. But, have we ever given thought to why we actually keep names? Imagine not having names and referring to one another by 'homo sapien number'. But thanks to the process of nomenclature, it is easier to address one another. As technology advances, we have numerous modes of communication. Right from cell phones to sms to e-mails, the world has indeed shrunk. And we keep making it simpler day by day. Rather than writing the long names, we prefer shortening them. Hence, Shahrukh Khan becomes SRK and Amitabh Bachchan is Big B.

The same goes with our favorite couples. Abhishek and Aishwarya are re-christened as AbhiAsh. The trend began with Ben Affleck and Jennifer Lopez being called Bennifer by their fans, followed by TomKat for Tom Cruise and Katie Holmes and Brangelina for Brad Pitt and Angelina Jolie.

So we decided to re-christen some of our favorite tellydom couples by picking some of the famous jodis and giving them new names.... Here they go..
Featured Video 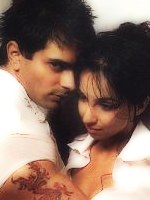 Karan Singh Grover and Shraddha Nigam: After an alleged rumor that the lovey dovey couple has split, we decided to add them first to the list. We mixed up the first few letters of their names and came up with 'KaSh' as a suitable name for them. Another option could be SharK, but that sounds too dangerous. Among the two, go ahead pick your favorite. 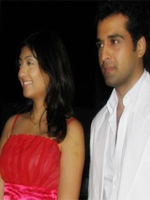 Sachin Shroff and Juhi Parmar: The newest couple of Tellywood that is soon to tie the knot. Now what name would suit these two? We came up 'SaHi' (means right) or SaJu. Well, whatever the name that sticks, we just wish them a happy and blessed married life! 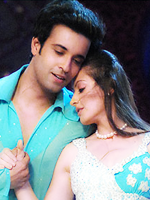 Aamir Ali And Sanjeeda Sheikh: The beautiful and gorgeous couple, winners of Nach Baliye. Aamir is most definitely the heartthrob of millions of girls, but Sanjeeda is not too far behind herself. And, truly they are a couple with loads of attitude which is also evident from the name we came up for them, 'AaDa'. 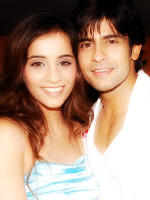 Hussein and Tina Kuwajerwala: One of television's most loved couple. Hussein is adored by one and all not only for his acting, but his stupendous dancing ability too while Tina is known for her vivacious personality. A couple truly made for one another and the name we got for the two by adding their letters, HuTi, is famous right from their Nach Baliye days. So we decided that this is the best choice for them. 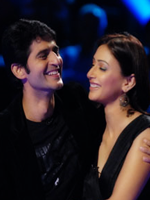 Hiten Tejwani and Gauri Pradhan: Loved by one and all, this pair is still fresh on television even after so many years. People look forward to seeing them on screen together, be it in daily soaps or reality shows. The name we suggest for them are 'GauHit' or 'TejAn'. Pick the one that appeals to you. 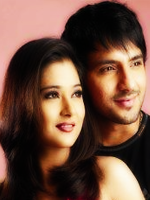 Ali Merchant and Sara Khan: The youngsters are much in love which was quite evident when Ali was at Sara's bedside when she took ill. So we thought of giving them a name as vibrant and young as their love. So how does 'AliAra' sound? Beautiful just like this young couple in love? 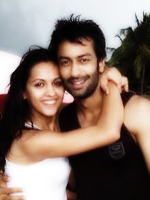 Jatin Shah and Priya Bhatija: Seen shaking their leg in one reality show, they will soon be seen in another. A rather shy couple, who prefers keeping their personal lives private, yet, the fragrance of their love has touched one and all. And the name we came up with is as sweet as them, 'JiYa'. Reminds of the song Jiya Dhadak Jaye right…. 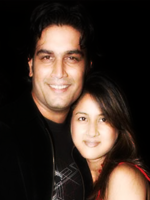 Sharad Kelkar and Kirti Kelkar: Another cute and much in love married couple who always support and stand by each other. Although Keerti is busy dancing in shows and Sharad busy with reality shows and daily soaps, they give each other the credit of their success. A couple of suggestions for them are 'ShIrti' or 'KiSh'. We think the latter is quite romantic, don't you? 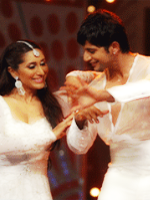 Karnvir Bohra and Teejay: A couple much in love and has loads of attitude, spunk and coolness. The very fact that Pooja Bhatt offered the two a movie speaks volumes about the chemistry that they share. Hence, the name for them should match their spunk and ultra cool look. We have 'TeeKa' or 'KaJay'. Any better suggestions? 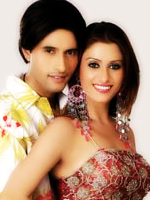 Apoorva and Shilpa Agnihotri: After playing 'Armaan Sir' in Jassi, Apoorva is still the 'armaan' of millions of girls while Shilpa is the princess of the small screen. And what better name to give them other than the name of God, 'ShiVa'. This name will ward off all evil and keep them safe from any bad vibes. What say?

14 years ago wat abt rajeev and aamna i mean even though not in real live but we can always imagine the beautiful couple cant we?

14 years ago hussain and tine
Sachin Shroff and Juhi Parmar:
most best pairs
i love ht.sj

14 years ago Please dun name them KaSh.. bcauze it waz alwayz karan and shilpa for KaSh..
I think sharK iz the better name for them..