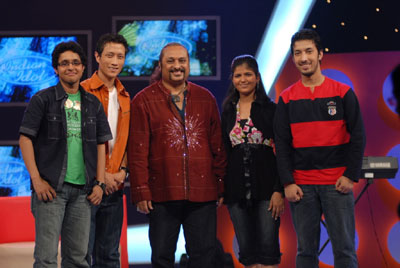 Roobaroo on Indian Idol is the day for just fun and masti. Here, the contestants get to show the viewers their hidden talents. The contestants have fun, while Mini Mathur makes sure to have fun at their expense. There have been guests who have taken utmost care to add to the fun quotient, like Riteish Deshmukh, Ganesh Hegde. And in this week’s Roobaroo, it is Leslie Lewis who is the guest and he too makes sure to keep the top four contestants' in good stead. 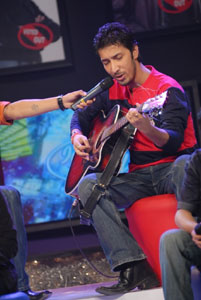 Viewers would get to see Prashant for the first time playing a guitar and singing a Nepali song. Amit sings “Chand Mera Dil”, while strumming the guitar as a pro and wooing the audience. Emon would be on the piano and with so much going on, can anyone stop Ankita from dancing? It would be really funny to watch her traipsing with Prashant, while singing the song “Pyaar Hua Ikraar hua”. What's more, after watching this diverse talent of these contestants,Leslie Lewis is really in awe with all the four. As a mark of advise, Lewis gave them tips for the future; this was followed by a round of musical session. With Mini too joining in, it turned into a rocking jam session. After watching all this, Leslie was now convinced that this Indian Idol Team, with some good singers, musicians and dancers, can actually form a band of their own, like Boney.M. Who knows they may really take up this idea and we may see such a band soon! 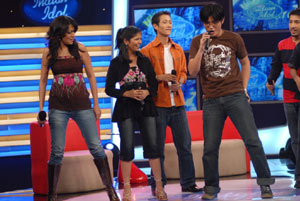 The entertainment and excitement does not end here. The most popular but eliminated contestant of Indian Idol, Meiyang Chang will make a come back as a guest, much to the delight of them all. In perfect shuddh Hindi, Chang speaks straight from his heart, just as we would expect him to say about his views on the next Indian Idol. Without any malice, he tells all that his first choice was Emon with Amit close behind and this observation, he makes purely on the basis of talent. He also joins the contestants to entertain all by singing the song “Mahive Teri yaad aati hai re” which can now be aptly said as Chang’s song in Indian Idol. Just for this very charming personality – Chang will be missed for a long, long time.

So make sure that you do not miss Roobaroo on Thursday 30th August at 9.00 pm only on Sony Entertainment Television.

sheikh89pk 14 years ago They all will come when there will be the Roobaroo with TOP 2!

14 years ago yayy!its going to b agreat epi!aww chang's cumin back and amit/prashant playing the guitar woooh!

14 years ago Nice to see back chang. But can't we bring two people back on wild card ???? Bring back Chang and Deepali

+ 2
14 years ago Thankx! everyone is luking awesome.

+ 3
14 years ago Aww..Chingo Mingo will be back... Thanxx for sharing the article

14 years ago AWWWWW CHANG will be in RUBAROO[:D]
now i really watch it tmrw for sure
he is looking shoooooo cute,
thanks for sharing :)

+ 5
14 years ago Yayyy I am so going to watch Roobaroo, although I was not planing to watch it but as Chang is coming I will have to watch it. Can't wait to see him again.