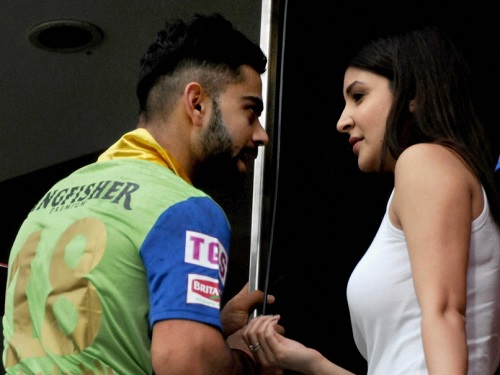 Love is in the air. While we all know how crazy our heartthrob cricketer Virat Kohli is about his lady love Anushka Sharma. Little did we know that he will have to serve a notice for his lovey dovey acts.
Yes, you got that right, recently at the 2015 IPL match between Royal Challengers Bangalore and Delhi Daredevils, Virat Kohli was snapped chatting with his girlfriend Anushka Sharma beside the VIP box during a rain break.
The match got interrupted at the 2nd innings due to sudden showers and RCB openers Virat and Chris Gayle returned back to pavilion. Within few minutes our dashing boy was caught in conversation with his partner.
Players cannot leave their appointed zone to socialize with anyone even during rain breaks.
According to reports, IPL Chairman Rajiv Shukla who was present there told the media persons that if he received the report from Anti Corruption and Security Unit (ACSU) of breach of protocol then Virat would be issued a warning not to repeat it.
It seems a little conversation has put Virat in big trouble.
Priyanka Chauhan

He really needed this warning its getting overboard, he always spot with her.

+ 5
5 years ago Awwwh! Love birds are too eager, but Dude, be strict with Rules. A suggestion; don't attend his matches Anushka! Than only your Love Virat can be saved lol anyway, They look great together, love their jodi. :p

Please, don't screw your future. There're people who like the Cricketer Virat.

He really needed this warning its getting overboard, he always spot with her.

5 years ago best they should keep their private issue as private ,true love dont need to show in public places