Lavanya Tripathi, the girl from Dehradun who was part of Channel [V]'s Get Gorgeous 5 has got her first break in a daily soap, in Balaji Telefilms and Sony Entertainment Television's upcoming show, Pyar Ka Bandhan. 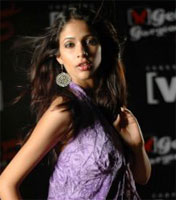 Featured Video
According to our source, "Lavanya Tripathi has been almost finalized to play the lead girl in Balaji's Pyar Ka Bandhan. She will play the youngest of the four siblings, who happens to be the main lead of the show".

As we had reported earlier, the show which will take the 10.30 PM slot on Sony is the tale of four siblings who get separated at childhood, after their mother's death.

"The channel and production house are looking for more options with regards to the actors to play the other three siblings. Nothing has been finalized yet", informs our source.

We had reported earlier that Muskaan Uppal, the little kid who plays Chahat in Kis Desh will play the younger version of the third sibling.

Pyar Ka Bandhan is tipped to launch on October 7th, Wednesday at the 10.30 PM slot on Sony. Shoot with the kids is already on, with one schedule in Kolkata and the other happening in Mumbai.

+ 6
13 years ago that is good about ekta she gives everyone a chance to prove their mettele ...anywqays i hav ve heard that it is gonna be a very hot show...

13 years ago really looking forward to this show cant wait