View Profile
It is not unknown that our Bollywood actors strive for perfection whilst shooting for a movie. To land that eventual perfect shot, it can take from one shot to countless, but it must be done to require that faultless scene our audiences would believe in. And of course, there's always the hope that the hard work will pay off in the form of a box-office hit. 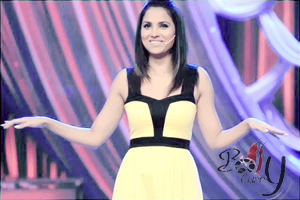 On the re-take front, Lara Dutta, who will be soon seen in Amul Comedy Ka Mahamuqabla has left everyone pleasantly stunned. The bubbly actress enacted a splendid performance for the show but the shock does not end there. Lara, along with her co-star, Vinay Pathak, delivered a flawless one-take gag!
The director along with the crew of the show were all ready for the different takes that were likely to ensue with the celeb's performance, they had even arranged for a tele-prompter to help Lara. But the actress, cast them all aside, neither needing any re-dos nor did she need to refer to a prompter.
We say, well done Lara! Don't forget to catch the unblemished episode on a box near you!
Author: Alisha B.
Editor: Jenifer.
Graphics: Zunni.
11 Likes