Ranveer Singh and Anushka Sharma-starrer 'Ladies vs Ricky Bahl' made an average start and the romantic comedy, which got mixed reviews, has earned approximately Rs.16.54 crore in the opening weekend. 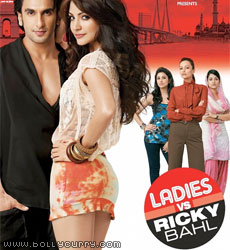 'Ladies vs Ricky Bahl' brought the 'Band Baaja Baaraat' trio of Ranveer, Anushka and director Maneesh Sharma together, but they couldn't repeat the same success story.

While some trade experts say that the film has opened up good, others feel that the Anushka-Ranveer jodi has failed this time.

'The response to the film is average as the occupancy has been 60-70 percent,' Yogesh Raizada, corporate head (Cinemas) of Wave Cinemas told IANS.

Puneet Sahay, of Spice Cinemas says that family audiences stayed away as the film targeted the young crowd.

'The occupancy has been around 85 percent in total for all three days and it targets younger crowd. The opening was dull on Friday but later it picked up in the next two days, however, the occupancy dropped again on Monday,' he said.

'The film is likely to get affected by the release of 'Mission Impossible 4: The Ghost Protocol'. There is a lot of buzz surrounding the film as it stars Anil Kapoor. However, the performances of all the actors have been good,' he added.

Raizada of Waves appreciated Parineeti and said: 'She is impressive when it comes to acting.'