9X’ Kya Dill Mein Hai which started with the original plot of a Bengali girl, Kaakon who loses her heart to the man of her dreams is now taking a 20 year leap. 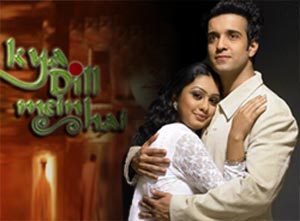 After getting the very popular off screen pair of Aamir Ali and Sanjeeda Sheikh together on screen for the first time, the creative team is now on course to make the track more interesting.

Confirming the news is our khabroo who said, “Yes, the news of the 20 year leap is true. All characters will be new and the only known face in the show will be Abegail post leap. The leap will take place on November 30th. We are also looking for a guy now, opposite the girl”.

Giving more info on the story line, our source adds “Kaakon will give birth to a baby girl who will look similar to her mother. She will also believe in love as she grows up and will have a dream boy in her mind”.

We talked to Abegail to know about the leap, but the girl was quite astonished when we narrated the future track. “This is news to me. I can’t say anything till I get the narration”, quips the actress.

However, Sanjeeda Sheikh was aware of such a leap being planned. “There are talks going on about the leap, but nothing is finalized as of now. It will take 6-7 days for things to get clear”, said she. When asked whether she will be part of the show if the leap takes place, Sanjeeda was quick to say “If the leap happens, then I will not be part of the show”.

We tried calling Aamir Ali, but he was unavailable for comments.

After Aamir Ali, wonder who will be the next eligible guy for the Kaakon look-alike!!

kdmh21 11 years ago Nooooooooooooo.......................
I dnt want dis to happen.The only reason why i watch is coz of rahul and kakoon.Amir and Abigail''s chemistry is perfect they r da BEST ON SCREEN COUPLE EVA!!!
They hav to reunite RAKUN.
Aaaaaaaaaaaaaargggggggggggh i cnt beliv dis is happening!

bungigyal4eva 11 years ago omg i hope this dusnt hppen!! i h8 ektha!!! i love amir ali dts da main reason i wtch it.. if they leave its gna b well shit.. no1 gna wtch it.

laney 11 years ago I think many people will lose interest in the show because of the leap! They should have united Rakoon, and then they could start a new show called KDMH-2 or whatever but please do not ruin our KDMH!!!! I want to see Rakoon together! I am sure this all happens because of sanjeeda but I dont want to sound harsh

Rayanaa 11 years ago What rubbish...Ekta you are just bad and aweful....I just watch this serial because of the characters and + the story. It''s the best serial I ever watched...This can''t happen. Just wait 6-7 days. They haven''t decided yet...

-Nymphadora- 11 years ago what rubbish!!every serial is taking a leap!!!how damn silly!!

second_chances 11 years ago i know im not hte only one who was watching it for amir ali . rahul kakun was really cute