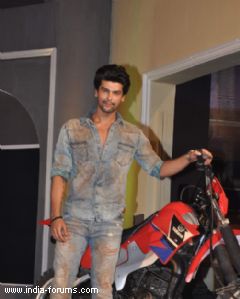 While there were reports claiming that TV's dashing dude Kushal Tandon who was seen as a contestant in the reality show Bigg Boss Saath 7 might not be a part of the stunt based reality show Khatron Ke Khiladi Darr ka Blockbuster due to his shoulder injury.

But making his fans happy, the actor was seen joining the contestants for the show and even flew to Cape Town to shoot for the same.

However, Kushal has been eliminated from the show citing the reason of his shoulder injury and it will be the show's first eviction. Rowdy actor Ajaz Khan will replace Kushal. But Kushal's lady love Gauahar Khan seems is not too happy with Ajaz's entry in the show as the duo were at the loggerheads since the Bigg Boss days.

Apparently Gauahar had even stated that she might walk out of the show if Ajaz Khan comes in as a contestant in the show.

Well, it seems that love conquers over all the victories!

tvbuf 6 years ago The one show 2nd lead wonder has dropped out ?

zeenathsheikh8 6 years ago I was wondering that when Kushal couldn't sit under the box for 5 min in BB7 how will he do stunts of KKK5??This was quite predictable

rani-lucki 6 years ago this guy is such a arrogant, lazy, talentless coward

love_never_dies 6 years ago Haha, yeh to hona hi tha... Kushal a guy who cant sit inside the box for 5 minutes in BB7 how will do stunts in KKK .. LOL , expecting him to get evicted first and here comes the article.. lol, shoulder injury toh bahana hai :P

Amy07 6 years ago We are happy as long as Kushal Gauhar are happy..

GETGOIN 6 years ago reading the comment section takes me back to BB7 Forum ;)

Crucio. 6 years ago erm...no words!!
I dont think, Gauahar will give a damn if Ajaz enters!