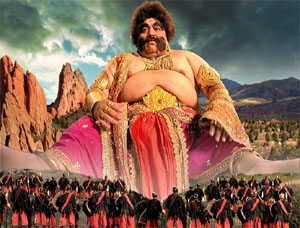 As the battle between good and evil reaches its peak in NDTV Imagine's Ramayan, the audience will get to witness one of the most interesting events of the epic, the awakening of Mahabali Kumbhkaran from his six month slumber to fight Lord Ram.

When Ravan loses the battle against Ram, he is humiliated and desperate to get revenge. Hence, he enlists the help of his monstrous brother Kumbhakaran. But awakening the latter from his sleep is an even more humongous task. Ravan's loyal servants took the aid of elephant trumpets, drums et al to wake the mammoth.

Kumbhkaran is a demon with a kind heart and knows deep down that Shri Ram is not just a mere mortal. When he learns about the war, he tries convincing Ravan that he is committing a sin and Sita should be honorably sent back to Ram. Filled with vengeance and pride, Ravan refuses to hear a word. Out of loyalty and love towards his elder brother, Kumbhkaran goes to the battlefield to wreak havoc amongst the Vanar Sena. But even as he goes to fight the battle, he is secretly happy as he knows there is nothing better than to lose his life at the hands of the great Lord Ram.

Don't miss the heroic battle as it unfolds on December 1st 2008, only on NDTV Imagine's Ramayan.

+ 4
13 years ago wowwwww coool..
i remember my mom telling me thisssss

+ 5
13 years ago im called kumbhkaran at home :p Lowe sleeping. Wish I could see this show.

+ 4
13 years ago i just love NDTV imagines RAMAYAN !!!!
soooooo happy tht kumbhkaran uncle is waking up !!
thanks for the lovely article & wish many more articles of show RAMAYAN wud b posted at telly buzz !!!

13 years ago WOOW ATLAST WAIT IS OVER NOW....
WILL HAVE GALA TIME WATCHING KUMBHKARAN UBCLE IN ACTION....

13 years ago wow, for some reason i forgot this part of the story... will definitely watch! Thanks!

13 years ago thanks a lot!!wud be interesting to watch!