Yesterday we had reported that new face Anupriya Kapoor who had bagged the role of the lead protagonist in Balaji Telefilms' upcoming show, Bayttaab on Sony Entertainment Television has been shown the door, courtesy her tantrums even before shooting a scene for the show!! 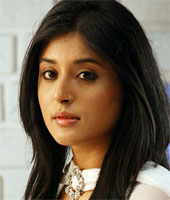 Well, her loss had to be somebody else's gain, and we hear that the charming Kritika Kamra of Kitani Mohabbat Hai fame is the next choice of the production house for the same role.

For the uninitiated, Kritika Kamra had earlier been approached for Balaji's second show on Sony, titled Pyar Ka Bandhan. She was to play one of the four siblings who get separated, in the concept loosely based on the movie Yaadon Ki Baraat.

According to our source, "The shoot of Bayttaab had to start very quickly as the launch date for the show is October 5th. With the last minute ouster of Anupriya Kapoor, the production house desperately tried to look for a new face for nearly two days. But they could not zero in on a perfect face for the role, and so opted for Kritika who fitted the bill to the 'T'".

However, the latest on this is that the channel has a problem with accepting Kritika for the above said role. "Kritika has given her nod for the show, but the channel authorities are in two minds, and are not sure whether Kritika will be perfect for essaying the role of Kanchan. Talks are on, but the channel and production house will be shooting two promos tonight, one with Kritika in it and the second with only the other two girls. The channel will review their decision tomorrow, and only then will they decide whether to take Kritika or not".

Our source adds, "If Kritika gets finalized, we will immediately start shoot tomorrow. But if she is not taken, then we will have to go thro' the whole process of auditions again. Nothing is clear as of now".

When contacted, Kritika Kamra admitted that she was considering being part of the second show, Pyar Ka Bandhan when she was asked to play the lead role in Bayttaab instead. She told us, "Pyar Ka Bandhan is a very beautiful concept, and I was thrilled when I got that role. However, Bayttaab provides me with a bigger challenge. The role is very powerful, challenging and above all, I will be not be playing a glamorized role, which is something different from Kitani Mohabbat Hai. I was happy when I got Pyar Ka Bandhan, but I am happier with Bayttaab".

Ask her whether she is aware that the channel is in two minds on finalizing her for Bayttaab, and she with a smile states, "I am not aware of it. I know that whatever Ekta offers me, will be good for me".

The actress personally feels that Kitani Mohabbat Hai would have got a better ending if it had stretched for one more month. "The ending would have been more logical if we were given one more month. However, the creative time has come up with a very justifiable end in such a short span of time. We will finally see the lovers Arjun and Arohi getting together after so much of tragedy and confusion".

As Kritika's future when it comes to doing Bayttaab hangs in balance, we await the channel's decision!!

ArjaAddict 10 years ago missing u arohi....kritz pls come in amy of da shows~

KhaLidaH 11 years ago all the best kk for the future and u surely well be missed as Arohi. p.s looking forward to ur next show

AnjanaYYZ 11 years ago Nothing on Sony lasts more than 30 seconds these dayz... Everything other than Bhaskar Bharati and the reality/game shows is a total FLOP...

ragzz. 11 years ago I miss the office days of KMH which made me crazy about Arjuhi, the magic is disappeared will never get to see it again..im gonna miss Arjuhi :(((

darkstark 11 years ago she is very good actress i think kitani couldn't have been the same without kritika as arohi..but she is coming back in kmh season 2 na..so hopefully she doesn't get the role .

-Preeti- 11 years ago i would love to see her in PKB
anyways ..wish her all the best