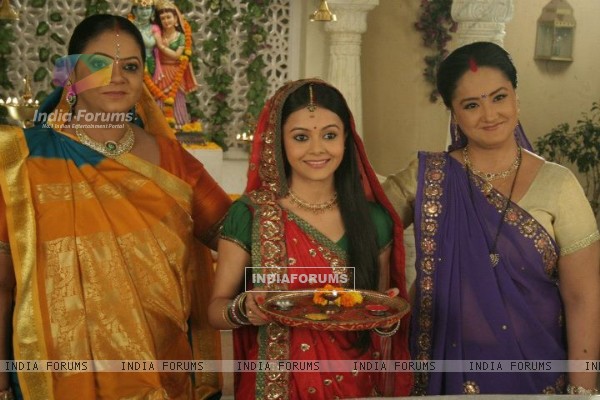 Rashmi Sharma Telefilm's popular show Saath Nibhana Saathiya on Star Plus is coming up with an interesting track where Kokila (Rupal Patel) will regain her memory.

From past few weeks the story is revolving around Kokila as she has partially lost her memory and members of Modi Parivaar are trying hard to regain her memory. All the members are facing lots of problem as Kokila is unable to recognize them which has created the confusion. Curiosity amongst audience has reached to its peak and so to give a twist in the tale, the track will be emphasized on Kokila who will regain her memory and the truth will also be revealed.

This will the most happy moment for Modi Parivaar but will create trouble in one person's life that is Radha (Bhavini Purohit).

Our reliable sources says, "All the Modi Parivaar will go to Vaishanav Devi to seek blessing from the goddess and will pray that Kokila regains her memory back. There will lots of drama in the show at Vaishanav Devi and finally Kokila will regain her memory. This will be the most delightful moment for Modi Parivaar. Later she will reveal the truth about Radha and Tripti that they are the people who tried to kill Meera and also tried to kill Kokila as she got to know about their truth. This will be a treat for their audiences."

We got in touch with Rupal Patel to know more about the track for which she said, "This is a million dollar question which my mother, brother, my kids and my viewers are asking that when will Kokila regain her memory, but officially I have no idea about this as I have not got any script. But it's a high time as my audience is very curious to see that sequence and so I will request my production and creative to script that sequence soon. But frankly I have no idea that whether we are going to Vaishanav Devi or anywhere else."

Well we also hope that the curiosity comes to an end and Kokila regains her memory. To know more keep reading the space.

boparaisonia 6 years ago It's about time kokila regains her memory

saaniakh 6 years ago Like the page of the most beautiful n Cutest Jodi on TV:

--Shamoo-- 6 years ago finally!!! radha and tripth to be exposed and kokila regains her memory back..so excited for the track

Eccentrica 6 years ago Finally! Another stretched plot comes to an end

radha and tripti are going to be exposed

exited for the rack!!

RoseWine 6 years ago I stopped watching it long time ago when Gia quit. It doesn't have the same spark as it used to!

DivineDarkness 6 years ago Finally!
but again they will drag this for a month or two...
God SNS CV's ..arrgh

ukgal62 6 years ago Thank goodness for that! It was getting too much now, but that's great... Looking forward to see Radha getting her butt kicked!!But... These dramas always have big hearted people who do not want to punish, but let Ghana ji do everything! :))