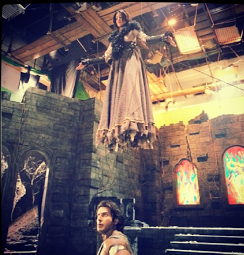 We have got an exclusive picture of Kishwer Merchantt who is donned in her avatar from the show Hatim. To know more about her character we tried contacting Kishwer Merchantt but she remained unavailable for any comments.

Kishwer Merchantt has already portrayed different characters and entertained the audience through her acting skills. In the show Savitri which aired on Life OK, Kishwer Merchantt was seen playing the role of Kayachaya and impressed the viewers with her performance in the show. She was very much appreciated for her role in that show too.

Kullfi Kumarr Bajewala child actress Aakriti Sharma to be seen in a ...

PiyaSarkar09 6 years ago Woww.. Like to see her on tvscreen again..:)

Shaina_b 6 years ago She was in the old Hatim too as an Egyptian queen!!!!

I loved her as Haseena Raichand and it is good to see her as a vampire again!!!!!

bookworm-ALS-- 6 years ago Wow she's going to play a vampire again.
Makes me miss PKYEK and Haseena too

Andromeda001 6 years ago She was in old Hatim too, an Egyptian queen. Kishwer u rocked as Haseena Raichand in Pkyek.

shubhika124 6 years ago Vampire in Hatim?

Gosh! She was in Rahil's Hatim too

Anyway! All the best to the new show...& Rajbeer!

oneheartMalec 6 years ago Kish back as a Vampire!!
Miss PKYEK!
Keep rocking!!

Shefali Shah on 'Delhi Crime' being nominated at Emmy Awards ...
8 hours ago