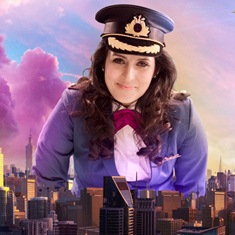 Rumors have it that Star Plus' upcoming show 'Airlines' is based the downfall of Kingfisher Airlines owned by India's self-styled aviation tycoon Vijay Mallya.

Kingfisher has been the most controversial and one of the most high profile airlines which had a lot to do with its owner Mr. Mallya. Our Khabroo close to the show says, "The show Airlines' too revolves around the thrill, glamor and danger associated with the aviation industry. How everything looks so glamorous on the outside just like Vijay Mallya and his life but when you look closer, one sees the difficulties involved in this competitive high risk industry."

Making her television debut with Airlines' show has actor Tulip Joshi as a strong female lead opposite VJ turned actor Yudhistir. We also hear about another actor on the show who looks a lot like Siddharth Mallya. We see a lot of comparison between the show and Kingfisher already.

Seems like 'Airlines' has kick-started the rumor ball even before the show goes on air.