View Profile
King Khan of Bollywood seems to be in a quagmire these days. Internet rounds of his troubled relationship with wife Gauri had plagued him and now he seems to be in trouble again - SRK got embroiled in a brawl yet again with MCA officials and security guard. 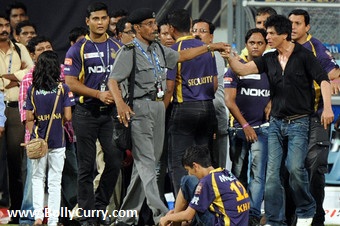 The incident happened yesterday when Shah Rukh's team Kolkata Knight Riders defeated Mumbai Indians and SRK along with his friends wanted to enter the field post the match. They were stopped by the security guards.

MCA officials informed that Shah Rukh was in an inebriated state when the brawl happened and he misbehaved with the security guards who tried to stop him and his friends. Further, they informed that SRK foul mouthed even their President Vilas Rao Deshmukh. The officials have decided to ban Shahrukh from entering the Wankhede Stadium.

This is not for the first time that SRK is making news for his misdemeanour. A couple of months back SRK created splash in the mediafor slapping Shirish Kunder , his close friend Farah Khan's husband. However,the matter was sorted amicably later.