View Profile
Kidnap is good entertaining pack for audience who have love for ‘ movie masala jerks’. There is hot Minnissha Lamba who is fashionably dressed in skimpy clothes that would be distracting, an item song by Sophie Chaudhry, nice songs which are beautifully picturised and once again great action punch. 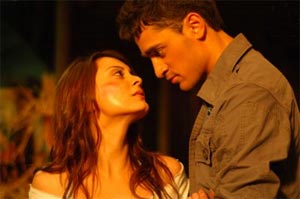 The story of ‘Kidnap’ is close to the plot line of movie ‘Zinda’. There are some similarities between the two but, Kidnap is not that dark and repugnant. Still it’s a story which is hard to digest. Sanjay Gadhvi not count as much logic as appropriate.
Basically the movie is an enthralling revenge drama between Kabir and Vikrant Raina in order to settle a old score for which he kidnap’s his daughter Sonia. To rescue his daughter from Kabir, Vikrant has to follow all the instructions and rules led by  Kabir and from here starts the less enticited game of cat-n-mouse. Things keep deteriorating as they reach the finale. The climax during the New Year eve too is very unrealistic.
Imran Khan holds the film together with an increase of more than crappy script solely on the power of his performance. There is something about his performance that catches attention. Minissha's character is firmly focused on her dresses, there are those cleavage-flaunting coats or hot pants with shimmering belly chains to bootable. The chemistry between the two is poor.
Sanjay Dutt’s performance is not  appreciable . Vidhya Malvade is efficient. Reema Lagoo is a mere prop. Rahul Dev's character looks forced.
Overall, Kidnap disappoints in terms of  story. The expectation from a Sanjay Gadhvi movie was more immense. The way writer Shibani has sketched the story is not impressive.The screenplay is seems to be amateur. The songs of the movie are good. At the box-office, KIDNAP being teen sensation Imran Khan's immediate release after the blockbuster hit JAANE TU… YA JAANE NA would ensure a strong opening weekend but,  the cons of the movie will take up as the initial stage passes.
Our rating: 2 chillies out of 5