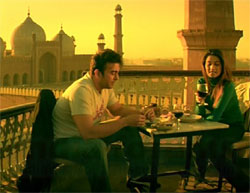 Reviewed by : Sampurn Anand
The Paki film industry has only been a poor cousin of Bollywood. That's the feeling we get looking at the quality of films (read poor copies of Bollywood), that Lollywood has churned out year after year for so many years...........Poor technique and lack of originality has done them in, time and again..

But this one that got Indian release months after the Pakistani release, and had some pleasant surprises in store. After the all glam med up 'Race' which lacked the basic - a good screenplay and the very poor '123', the viewers finally got the opportunity to spot a good story here. Wish the production values and the technical aspects were as good too…

This one's not a formula flick with silly song and dance routines. It's based around an issue.

The story did have a tale to tell and a message to convey. About the Muslim viewpoint- how the world looks at them post 9/11 and the pull they feel at home from fundamentalists! So the stuff talked about here is all real!

It's the story of two brothers (Shan and Fawad Khan) running together. While the younger brother falls in to the trap set by fundamentalists and leaves his music career to serve Islam, the elder brother leaves for US to pursue a career in music. And there is their uncle in London who is okay with having relationships with white women but
Featured Video 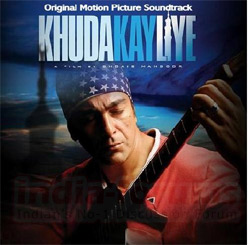 isn't okay with his daughter choosing a white husband. Height of hypocrisy, quite true to real life! The lead actress trying to escape from Afghanistan had glimpses of the Sally Field starrer 'Not without my daughter.'

This movie though should appeal to the intellectual class more, needs attention to grasp a few important things.

The chaste Urdu used in several portions is hard to comprehend. Guess subtitles would have helped the commoners a great deal.

The hero Shan does a pretty good job and you get to know why he is considered the Shah Rukh of Pakistan.

Even though at many times looks far too chubby to pass off as a youngster, he does well. So does the foreign actress Austin Marie Sayre cast opposite him! But then the track where people get carried away by the music of Pakistan in Chicago look a bit too far fetched! Didn't know Paki music was so very popular!

Hameed Sheikh plays the irritating and political Maulvi, and actually that proves that he is actually a good actor!

Our very own Naseeruddin Shah shines in a guest appearance. A very convincing Maulvi act! He is a powerhouse performer, no doubt about that!

If only the film had been provided with better production values and cinematography, 'Khuda Key Liye' would sure have been better on the whole! If you are looking at pure popcorn entertainment, then this one's not your cup of tea. If not, you can give it a try! (SAMPURN)