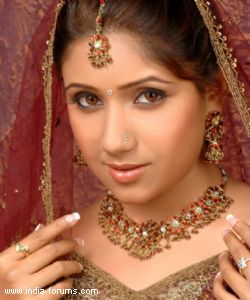 Telly Buzz had already reported about Colors' newly launched Hamari Saas Leela  changing its genre from light hearted entertainer to serious family drama. We had also reported that various celebrities will join Leela in her hunt for her Buhus.

The coming episodes will introduce the first female lead of the show; the first Bahu of Leela (Apara Mehta) and it will be essayed by Ketkie. J.

A Source informs, "Ketkie. J who was last seen as the lead in Sony's Sukh by Chance, will play the character of Rupal, who will be opposite to the second son of Leela. Rupal belongs to a middle class family and will be simple and sweet in the initial episodes after her entry. But her true colours of greediness will be revealed after she gets married to Leela's son."

We contacted Ketkie and she confirmed her presence in the show saying, "All I can say is yes, I am playing the role of Rupal, one of the leads, who is a simple sweet girl."

Ketkie has started her shoot today and her entry will be shown in the coming episodes of the show.

-Preeti- 9 years ago thats good ... isnt she the same who was in jassuben too?

shinyclassic 9 years ago yeah she wont match harsh ,,harsh should get a better one

LegolasGondolin 9 years ago thnx for the news...
waiting to c harshs wife.

x.n0sh.x 11 years ago Hoepfully Preity will find a better guy than Ness.

Someone who will respect her decision and her wants.

cookie2006 11 years ago good job priety... it's absolutely her decision to work or not after marriage. i wish her career gets better shape..

desi_pryde 11 years ago i love preity. i wud hve been sad to see her let go of this film industry. im glad she made the right decision.

-DulceMaria- 11 years ago Love her for her decision , good luck PZ u will def get a better guy .

ght_jaanus 11 years ago love Preity for her decision , I mean men are sick and disgusting and they only think about themselves , idiots ,iam happy she made a right choice

Aurum 11 years ago tht stinks. good 4 her. im glad she isnt quitting her profession. clearly the guy didnt like her enough if hes gonna make her quit wht she does best.

VasuS 11 years ago i don't think that this could be the reason.. this would have been the reason a couple of years ago when preity was in demand..nowadays her film career is dead anyway so why bother with that demand?...having said that ..what career if any she wants to have post marriage is totally her decision to make..

Saying Goodbye To 'Keeping Up With the Kardarshians' - ...
14 minutes ago

Here Are The Indian Shows That Made it To International Emmy ...
36 minutes ago

Abhishek Bachchan Conducted an Ask Me Anything Session; ...
55 minutes ago

Fukrey 3 Team Kick-starts their Work ahead of Shooting; ...
an hour ago