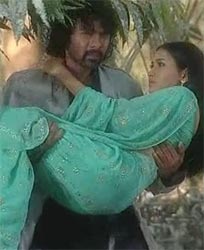 All is back to the Shah family now in Kayamath as Milind(Shabbir Ahluwalia) and Prachi(Panchi Bora) have united once again!!

However, the buzz is that the story ahead will now go the Kremer V/s Kremer way, where the couple gets entangled in ego clashes. “Milind and Prachi are leading a happy life with their kid, till the time Milind starts losing his hold on business. Milind’s work starts to suffer while Prachi does very well for herself professionally. This creates an ego clash between the two, which ultimately boils down to ruining their married life”, explains out source.

“They soon decide to part ways, but then the big twist arises when the question over the possession of their kid, Sumontro is raised”, adds our source.

Well, if sources are to be believed, the story will take a turn as both Milind and Prachi will be shown fighting a court case for the possession of Sumontro.

Both Panchi and Shabbir were unavailable for comments..

Well, as for now, it looks like Kayamath is heading for some high-intensity drama….

13 years ago I really dont understand what is their problem keeping Michi together.

Cant they show any trac where michi is together and handling any situation?

13 years ago Dear creatives, writers and the Majesty Ekta, you''ll kill all the fans of Michi!!! First you separate them because of this stupid and vulgar Malika, the show took aleap of five years, sumonto calls Proteek dad and not Millind and now back to the shah family, this new twists! I''m sorry but this really sucks! If you don''t know how to continue the show, go and get help. We michi fan die to see them together but this does not mean that we will accept such a shit storyline!!! Ego problem................ seriously Ekta, u''ve lost it!!!

You''ll break so many hearts with your nonsense new track and there so many young fans of the show will stop believing in true love as protrayed by michi!!! Moreover let me remind you that your character, prachi Mishra is a very docile and homely character, then how come she''ll step in the work field and comes as a rebellious character!!! Ekta, a person can change her habit but not her personality!! And she is pativrita(Prachi said this herself in a recent interviw). she also said that when prachi is with millind, she feels at the top of the world and so do we, michi fans! Now you will separate them due to ego problem!

I beg you Ekta, change the storyline and save kayamath, nahin to sach mein kayamath ho jayenge!!

13 years ago Making Kayamath go the kremer/kremer has made kayamat lost all its charm. I have hung in there through the massive butchering that prachi went through over the 3 months, first for the leap and than most brutally during the dasgupta period followed by her going all the way to the mandap. To establish dasguptas, prachi was killed to the point where a she gave another man''s name to her and milind''s memonto of love, sumonto. Now very little is left in him except this faith that milind and prachi will be happy with their son and make up for loss time and that was what kept me watching kymt after the most forced michi reunion to date under these new creatives. Today you finally cured me of my addiction of kayamt and I think ekta have hammered the final nail in Kymr''s ''s coffin. I thankyou for curing my addiction from watcching this crap with body doubles, no real storyline and decimated characters whom as a viewer have no more connection with. am such a dissapointed and disgusted fan that I feel I really mad at myself that I actually got attached to this show. I understand ego issues in a husband wife relationship. divorce is totally out of place and so is custody case . parenthood is the cornerstone of any marital relationship, . What total and utterly inconsistent trash to show michi fighing each other for custody over sumont. thats not the michi we know and love.I don''t have any words to describe what kymt has turned into.
ekta really put the nail in the coffin.

+ 3
13 years ago This upcoming track has FINALLY killed my interest and attachment to the show all together now.

For me, Milind and Prachi will always be special!!!

pratz123 13 years ago this is so stupid.how much more crap one should buy for Shabbir/Milind sake?

13 years ago oh oh oh oh oh dear GOD not again :((((
what is wrong with this ppl?why can''t they think of anything else but Michi being away from each other everytime :((

MichiForever 13 years ago I used to respect Sandeep for his creativity in Kasam Se. But where has all his creativity gone in Kayamath? All his creativity has taken a back seat now. Milind & Prachi got the maximum appreciation in this show and this new Kramer vs Kramer twist will not do any justice to Michi''s love story. The leap and Dasgupta drama already has killed the earlier love and attachment for Kayamath. I don''t think I can tolerate this monostrosity any longer. Till something amazing takes place between Michi, its goodbye to this show again.

rups_G 13 years ago widout michi kmt wil be so booooooooring