View Profile
Sandra Bullock couldn't manage driving a bus for Speed but our desi girl Kavita Kaushik could very well handle the wheels of a truck for a scene in SAB TV's FIR! 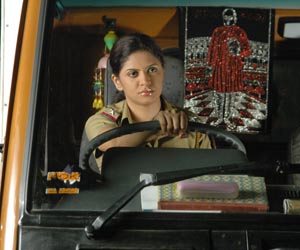 Featured Video
It so happens that an action scene in FIR needed a truck to be driven. But the director was not confident about a 'girl' doing such a job, so handed the responsibility over to a junior artiste. However, Kavita made sure the director realized he should trust girls more when it comes to assigning tough jobs!

Kavita tells us, "When I came to know of the action sequence I asked the director to let me do it. But the director wasn't very sure of me handling the truck. He was like – nahi tum ladki ho. Tumhe kuch ho jayega toh? (You are a girl, what if something happens to you?) So he went ahead and gave the responsibility to a junior artist."

However, Kavita soon realized that fate was in her favor. She says, "When we went near the truck the junior artiste expressed his fears about driving the truck. I told him not to worry and just let me handle it."

It was quite a scene when people on the sets realized that it was Kavita who was behind the steering wheel. An elated Kavita says, "It was a pleasant surprise for everyone when they saw me driving the truck!" The actress is pleased for having achieved a sort of an accomplishment. She says, "When I saw myself on the screen, I found it amusing as I saw a thin girl maneuvering a big truck!"

The most shocking part is that Kavita improvised the whole thing. She says, "No I've neither had formal training to drive heavy vehicles nor have I ever driven a truck before. I just read the instructions and was careful I followed them all properly. Like the first gear is like the reverse gear of a car. I gave my full attention to the task and thankfully, all went well."

Way to go Kavita, you've made all the girls out there proud!

erandas 11 years ago can anyone send me that video..
Kavita Kaushik's truck-driving adventure!

You made us girls proud!!!!