View Profile
Heard of the quote 'Practice makes man perfect' and it really does. Recent example is our pretty 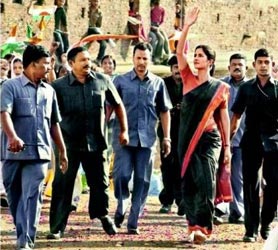 Featured Video
actress Katrina Kaif. We all know at present she is shooting for Prakash Jha's 'Rajiniti'.


The title of the film itself says that it has all to do with politics. In the movie Kat plays a role of a politician that is said to be inspired by political leader Sonia Gandhi. Playing such a role is fine but as we know the actress is not well-equipped with 'hindi' language and Prakash Jha is known for the 'realism' element that he brings in his films. The clever director wanted Kat to deliver her dialogues along with a proper diction. Guys want to know what happened next.


It happened like for hours the actress disappeared from the sets and when she came in to give her final take she astonished everyone on the sets with the kind of performance she made before the camera.


It seems that 'Rajniti' will definitely pull out best of Katrina's performances and will break her stereo-typical image of 'glam-doll'.