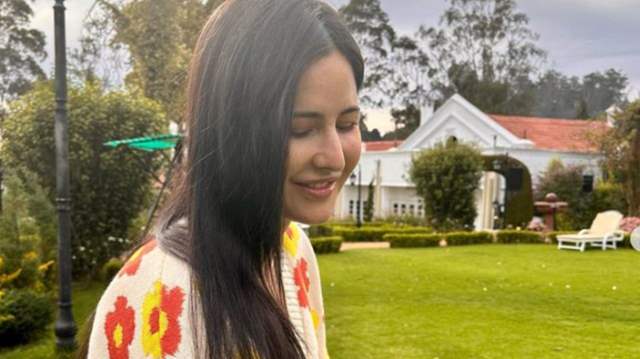 Katrina Kaif and Vicky Kaushal have proved that they are just the best for each other and have been setting major couple goals. After 2 days, it will be a year since the couple tied the knot and turned husband wife.

Currently, Vicky Kaushal is busy shooting for his film 'Sam Bahadur' in some hilly region and looks like wifey Katrina has joined him there to mark their one year anniversary which will be falling on the 9th of December.

A while ago, Katrina took to her social media handle and shared a bunch of pictures wherein she could be seen all cozy decked in a sweater, being clicked by none other than her hubby Vicky. In the pictures, she opted for a natural no-makeup look and donned a cream woolen sweater with red and orange flowers on it. In the backdrop of her pictures, we could see a lush green lawn, with a beautiful white villa and chairs. Sharing the pictures, Kat wrote, "Pahadon mein……📸: Husband".

Well, there is no doubt to the fact that fans love this couple immensely. For the unversed, they tied the knot on 9th December 2021 in Madhopur, Rajasthan. Their wedding was a close knit affair where only close friends and family members were in attendance. The couple also had a bunch of pre wedding festivities like Haldi, Mehendi and Sangeet and we still fawn over the beautiful pictures shared by them from the ceremonies.

Now, it would be exciting to get our hands on the mushy pictures of the couple as they celebrate their 1 year anniversary.

+ 12
1 months ago Kat is looking nice in that sweater.