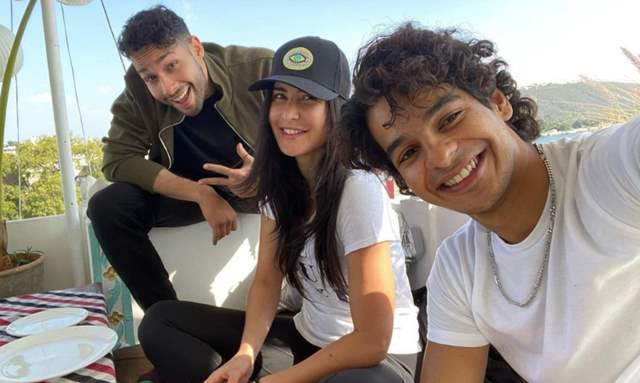 Phone Bhoot gang: Katrina Kaif, Siddhant Chaturvedi and Ishaan Khatter seem to be bonding really well as the fun trio has shared another glimpse on social media and it is proof of just how much fun they have with each other.

Katrina shared a series of photos on her Instagram which shows Ishaan, Siddhant and herself in a very candid mood as they enjoy a beautiful lakeside view in Udaipur, where they are currently shooting for their film. Producer, Ritesh Sidhwani joined the squad for the shoot as well as he can be seen enjoying with the cast in these pictures.

The actress captioned these behind the scene glimpses of the gang's fun time with emojis of their film's name. Have a look:

The three can be seen laughing, sharing funny clips or just chilling with each other from time to time on each other's social media as they seem to share a great rapport with each other. Everyone seems to be assured of the fact that when these three are together it means a great fun time from what we have been seeing till now.

Phone Bhoot is a horror-comedy is reported to be helmed by Gurmeet Singh and bankrolled by Ritesh Sidhwani and Farhan Akhtar’s joint production house Excel Entertainment.