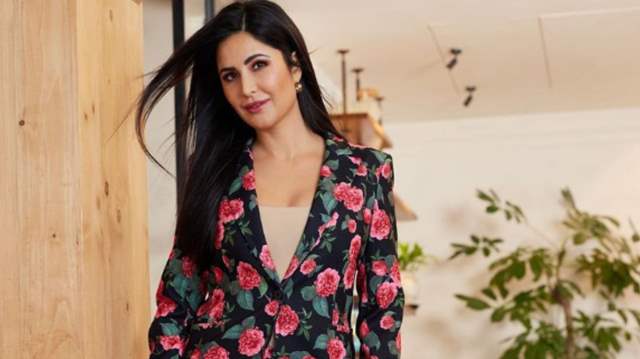 Katrina Kaif is currently revving up for the release of her film Phone Bhoot. Today, the trailer of the film featuring her, Ishaan Khatter and Siddhant Chaturvedi in pivotal roles will b launching in an event in Mumbai and looks like Katrina is all set to slay.

The actress is all doolled up for the event and took to her social media handle to showcase her chic style and outfit to all her fans and followers. Kat opted to sport a floral pant suit for the event. She styled the black pant suit with pink floral print on a skin tube inner.

To be noted, this will be Katrina Kaif's first film post her wedding with Vicky Kaushal. The film which is touted to be a horror-comedy is helmed by Gurrmmeet Singh and will be backed by Farhan Akhtar and Ritesh Sidhwani's Excel Entertainment. The film also features  Jackie Shroff, Sheeba Chadha, and Nidhi Bisht in supporting roles and will be hitting the theatres on 4th November.

The film's main cast including Katrina, Ishaan and Siddhant was last seen together at Koffee With Karan, promoting their film as well as spilling beans about their on-set pranks and fun.

Apart from this, Katrina Kaif has quite exciting projects in the works. She will next be seen in 'Merry Christmas' alongside south star Vijay Setupathi. She will also reprise her role in the Tiger series third instalment along with Salman Khan. Additionally Kat will share screen with Alia Bhatt and Priyanka Chopra in Farhan Akhtar's film 'Jee Le Zaraa'.