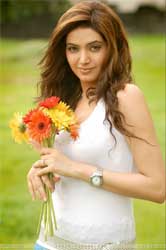 Following the entry of Mihir Mishra, Star One's Jaane Pehchaane Se Ye Ajnabbi produced by Cinevistaas will see yet another entry in the tall and lanky Karishma Tanna.

The present track which revolves around Kamini (Varsha Usgaonkar) getting exposed will come to an end by this week. The track will wind up in a rather light note and will be devoid of the drama element.

Following this, the story will shift to a funny and enjoyable track typical of the Star One genre of shows, and will also take a different turn with the entry of Karishma.

According to our source, "Karishma Tanna will play a rich business tycoon, Avni who knows Veer (Siddharth Shukla) from her college days. She volunteers to help Veer in his financial crisis by taking the ownership of the hotel. She is a lady who is tough from the outside but is soft from the inside. She will in due course of time develop closeness with Veer, and there will ultimately be a love triangle between Veer, Ayesha (Sanjeeda Sheikh) and Avni. However, Avni will be shown to be a positive character and the love triangle will be treated differently, with light and funny moments".

Karishma will be starting shoot in few days time, and her entry sequence will be aired in the coming Tuesday or Wednesday episode.

When contacted, Karishma confirmed the news to TellyBuzz and said, "Yes, I will be a part of Ajnabee very soon. It's a cameo role where I play a girl who is strict yet caring. I have not started shoot yet, so do not have much of a brief on the role".

Mihir Mishra who recently entered will remain to be an integral part of the show, and will have a specific role to play.

Karishma Tanna has a dual responsibility on her shoulders now, as she will be seen hosting the one of its kind magic reality show on Star One, titled India's Magic Star. In accordance to this, Karishma quips, "Yes it feels great to be the sole host of such a unique show. I have been busy shooting for it. This is a very different concept for television, and I hope its does well".

+ 2
5 years ago Siddharth Shukla you are always do your part just perfectly.Love you a lot.

6 years ago Siddharth Shukla is made for a lead roles...

+ 2
6 years ago Siddharth Shukla, love you in each and every role.

+ 4
10 years ago i love this show its getting very good after mihir entered I hope veer and aysha are not seperated.

10 years ago Thats nice though I am watching this show only for Sanjeeda.