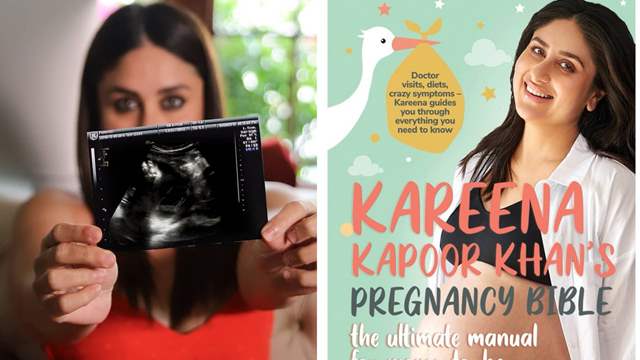 On Friday morning, Kareena Kapoor Khan teased a surprise as she took to her Instagram handle to share a picture of a sonography.

Kareena, who welcomed her second baby boy with Saif Ali Khan on February 21, 2021 wrote in her post: "Been working on something exciting... but it's not what you're thinking. Watch this space for more. #ComingSoon."

While some fans wondered if it’s a sequel to her film ‘Good Newwz’, others guessed if it was about her pregnancy book.

A few minutes later, Kareena brought the cat out of the bag and announced that her pregnancy bible is now ready. She presented a copy of her pregnancy book and shared the process as she wrote:

"This has been quite the journey… both my pregnancies and writing my Pregnancy Bible. There were good days and bad days; some days I was raring to go to work and others where I struggled to get out of bed. This book is a very personal account of what I experienced both physically and emotionally through both my pregnancies."

Bebo even thanked everyone involved in the publication of the film, including her publishers and gynecologists. She added:

“In many ways, this book is like my third child… from conception to its birth today. Published by @juggernaut.in and the amazing @chikisarkar, I’m proud to share that my Pregnancy Bible is vetted and approved by FOGSI, India's official body of gynecologists and obstetricians, along with the help of several expert voices like @rujuta.diwekar, Dr. Sonali Gupta, and Dr. Prabha Chandra of NIMHANS.”

Kareena Kapoor Khan had announced the book in 2020, on her first son Taimur Ali Khan’s birthday.

Earlier today, it was reported that Saif and Kareena have named their second son Jeh at home, and are reportedly even considering the name Mansoor after the name of Saif's father Mansoor Ali Khan Pataudi. The couple is yet to confirm the same.